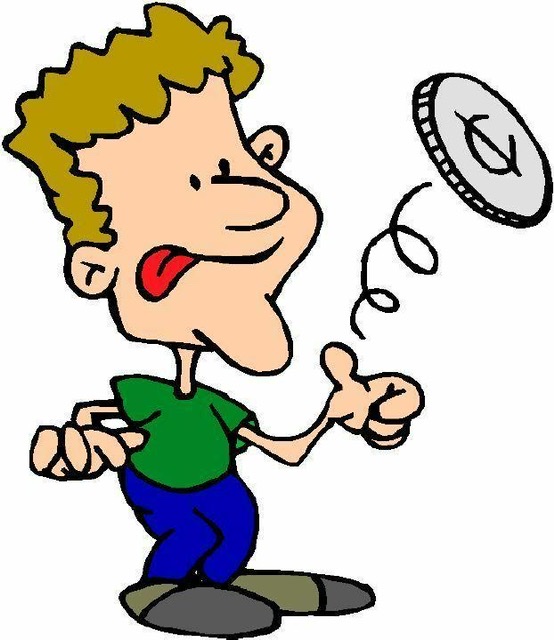 For Linda G. Hill’s Stream of Consciousness Saturday prompt today, Linda has given us the word “toss” and instructed us to use it any way we’d like.

I had a bit of a tough time trying to figure out what to write. It was a toss-up between writing a scathing post about Donald Trump or writing one about the many uses of the word “toss.” I asked my wife what she thought and she shrugged her shoulders and said something like, “It’s your goddam blog. I couldn’t care less.” Thanks for you help, sweetheart.

So I decided to toss a coin. As I was doing so, I began to wonder about where the idea of a toss-up came from. So I Googled it and found out that the expression comes from the habit people have of tossing a coin in order to make a choice between two things. If the coin is “heads” (the front side), we choose the first option; if the coin is “tails” (the back side), we choose the second option.

A coin toss can also be used as a way to solve a dispute before the matter escalates. It’s considered to be simple and unbiased, requires little effort, and it provides even odds (50/50) to both sides.

The coin toss is also used in some sports, such as in American Football, to decide which end of the field the teams will play to and/or which team gets the ball first.

And in these pandemic days, when my wife and I are trying to decide whether to call for pizza or Chinese delivery for dinner, we will often toss a coin.

And finally, last night I made the decision to not watch Donald Trump’s rally and speech in front of Mount Rushmore without having to resort to tossing a coin. Why not? Because every time I see or hear him, it makes me feel like I need to toss my cookies. Oh, and one more thing. The phrase “toss-up” or “toss a coin” always brings this song to mind: