“Say it, don’t spray it,” Anita said as she wiped the spittle from her face with an overly dramatic flair.

“You always do that when you get excited,” Anita said. “It’s disgusting.”

“Well, by all means,” Anita said, “Don’t hesitate to get to the point, but please leave out any extraneous details.”

“Fine,” Dan said. “You remember Aunt Dora? She died last year, shortly after she had a her gallbladder removed. The doctors were amazed that her organ was the size of a small watermelon.”

Losing patience, Anita said, “Yes, I know that. So what?”

“Uncle Harry was cleaning out her place and guess what he found there,” Dan said excitedly.

Anita sighed. “I’ll bite. What did he find?”

“Aunt Dora kept that watermelon-sized gallbladder in a jar filled with formaldehyde in her fucking attic!” 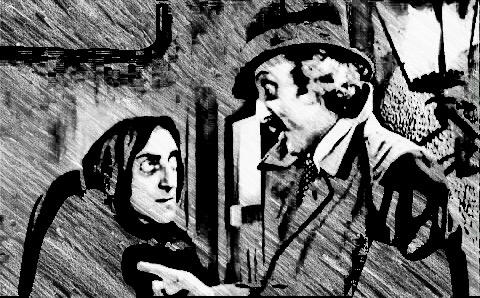 “You really made a mess of things, Igor,” Dr. Frankenstein said.

“Hey, it’s not my fault, dammit,” Igor objected. “Your instructions were too vague. You didn’t specify the size or age of the organ.”

“Oh my God, Igor, you always come up with some sort of scapegoat for your own mistakes,” Dr. Frankenstein said. “For once in your life, you need to take responsibility for your actions.”

“Listen, it’s not too late to make this right,” Igor said. “I’ll just go back to the morgue in the basement of the sanctuary and get another one. And this one will be even larger and better.”

“Good,” said Dr. Frankenstein, “because when I regenerate this corpse, I want to make sure his schlong is proportional to his eight-foot tall frame.”

For today’s Stream of Consciousness Saturday prompt, Linda G. Hill has asked us to “talk about an organ or base your post on the theme of them…or one.”

Okay, I’ve got to get my mind out of the gutter. I have to admit that the first thing that came to mind was sex organ. But since this a PG-rated blog, I decided to think of other types of organs, like internal organs. You know, livers, kidneys, lungs, hearts (although some might argue that the heart is a muscle and not an organ).

And there are electronic organs and these days even digital organs.

But to my mind, there’s nothing like the organ grinder. No, not the kind you find in a butcher shop to make to make chopped liver. The organ grinder I’m thinking about was an entertainer who played a barrel organ in the streets back in the 19th century and the early part of the 20th century. You often found them with little monkeys that were trained to dance around to the sounds coming from the organ. 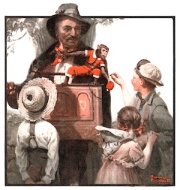 And that, in a true stream of consciousness mode, led me to the old song by Donovan, “The Hurdy Gurdy Man.”