I used to think of myself as a man of the world — a well-traveled, fairly learned, and sophisticated man. But it’s just not true. Not by a long shot.

A friend of mine told me about an app for the iPhone (and I assume there’s an Android version as well) called “Been.” The app allows you to identify all of the countries across the globe you’ve ever been to. I thought that would be cool, so I downloaded the app from the Apple App Store.

I started tagging all of the countries I’ve traveled to. I even went so far as to tag all of the states in the United States I’ve been to.

The good news is that I’ve been to all 50 states in the U.S. And I’ve been to three countries (Canada, U.S., and Mexico) in North America.

But then my “man of the world” self-image got destroyed. I’ve been to just 12 countries in Europe and only one in Asia (Israel).

And I’ve never been to any of the countries of Central America, which “Been” considers to part of North America. Or to any countries in South America. Or Africa. Or Oceania (Australia, New Zealand, South Pacific islands, etc). Sheesh!

I’ve never been south of the equator. And the furthest east I’ve ever been is western Russia.

The map below, from the “Been” app, shows in orange the countries of the world I’ve been to. The counties I have never been to are shown in gray. 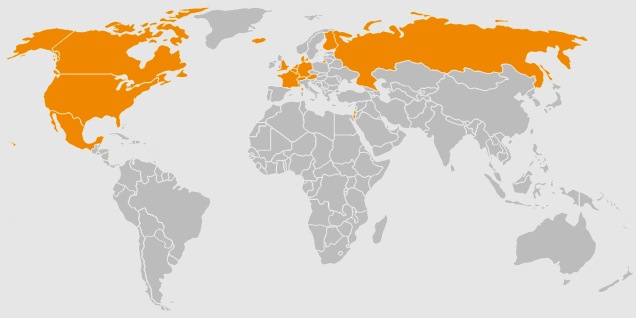 Yes, I know. Very little orange and a whole lot of gray.

I’ve never had a bucket list, but I think I might start one. And at the top of that list will be to turn this map a whole lot more orange than it currently is.

Now all I have to do is win the lottery so that I can afford to fund the one and only item on my bucket list.