I admit that when I saw Rochelle Wisoff-Fields’ photo for this week’s Friday Fictioneers prompt, the only thing that came to mind was my wife’s complaint that the sound that comes out of my mouth when I’m sleeping is like that of sawing logs.

I was puzzled as I tried to come up with my 100-word flash fiction post for Rochelle’s prompt. After all, writing about what my wife hears when I’m sleeping next to her is not exactly flash fiction, is it?

But wait, maybe it is. I never hear myself snoring. I bet she’s making it all up.

Written for this week’s Friday Fictioneers prompt from Rochelle Wisoff-Fields. And for today’s one-word prompt, “puzzled.” 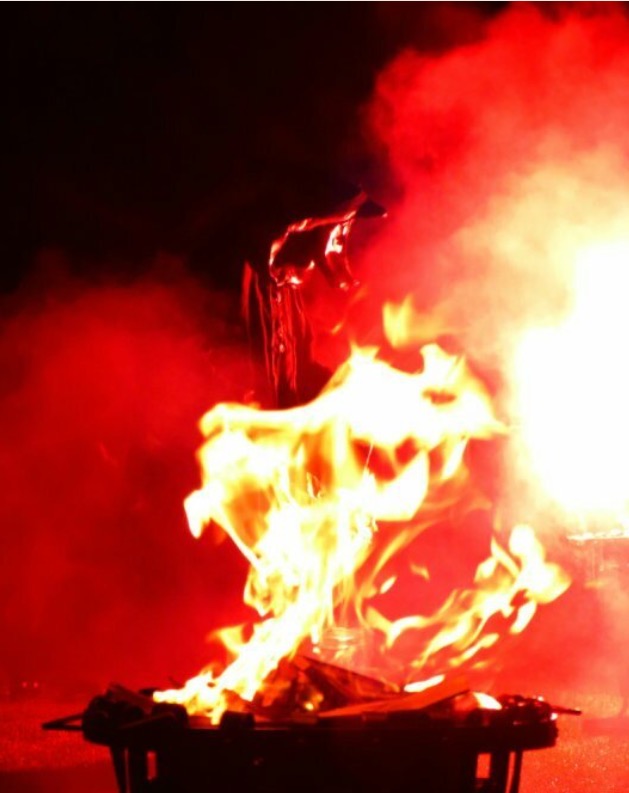 Everyone was looking forward to the fun-filled evening. Family and friends would shortly be gathering in the backyard for the annual Halloween bonfire.

Jack had placed a dozen or so chairs around the large, above-ground, metal firepit into which Stephen had stacked the nicely aged logs on top of kindling sticks and easily got the large fire started.

Maureen filled the cooler with ice. Mike tapped the keg. Frank stocked the patio bar with the liquor, various mixers, and the wine.

People started showing up decked out in their colorful and creative Halloween costumes shortly after 9:00 and by around 10:30 there must have been around two dozen revelers filling the yard.

Tommy’s job was to keep the fire blazing, both for warmth and for light. But he’d been drinking heavily since the party started. Maureen was the first to notice that the fire was fading. She looked around for Tommy and finally found him standing by himself nursing a beer and smoking a joint next to the house.

Maureen walked over to Tommy and pointed out that he needed to tend to the fire. He shot her a dirty look for interrupting his solo reverie, but went to the garage to get some more kindling and logs. Unfortunately, there was no kindling left. So he threw half a dozen logs into the wheelbarrow and wheeled them out to the firepit.

He took four of the logs and tossed them haphazardly into the pit. He pulled out his Zippo lighter, flicked the flame on, and tried to get the logs to catch fire. But he couldn’t get the fire going again.

In his state, Tommy probably should have asked one of the others for some help, but he was quite inebriated and stoned, which is why he didn’t. Instead, he figured out a way on his own. He headed back to the garage and found the can of Kingsford Charcoal Lighter Fluid that the family used for the barbecue grill.

Excited, Tommy ran back out to the firepit, opened up the can of lighter fluid, and sprayed it liberally all over the four logs. He then took out his Zippo, flicked on the flame, and touched it against the nearest of the four logs.

The instant the small flame from the lighter pressed up against the lighter-fluid drenched log, the explosion of flames engulfed Tommy.

Other than that, though, it was a good Halloween party.

This post is for this week’s photo prompt from Sue Vincent.