For this week’s Thursday Inspiration, Paula Light has given us the picture above and the theme “sunset.”

When we lived in the city, our house faced due west and was located just three miles east of the Pacific Ocean. Unfortunately, we were at a low-lying section of the city, so when looking west, you couldn’t really get much of a sunset view. And the view from the back of our house — the view to the east — faced the side of a mid-rise apartment building. So no decent sunrise views, either.

When we moved to the East Bay in February, we moved into a house in suburbia that is situated on top of a small hill. It has some spectacular sunset views that I thought I’d share with you. 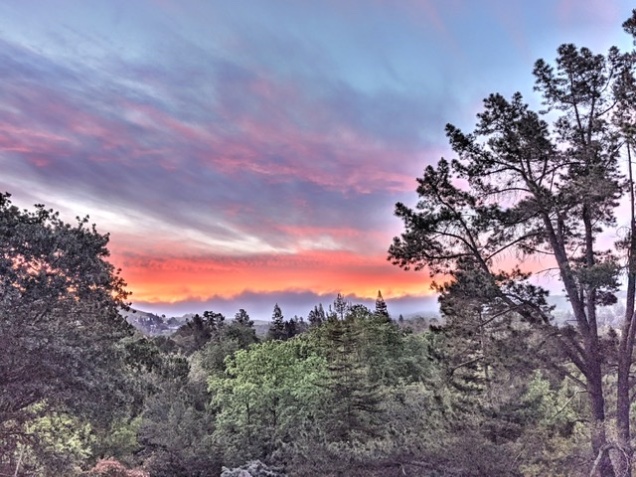 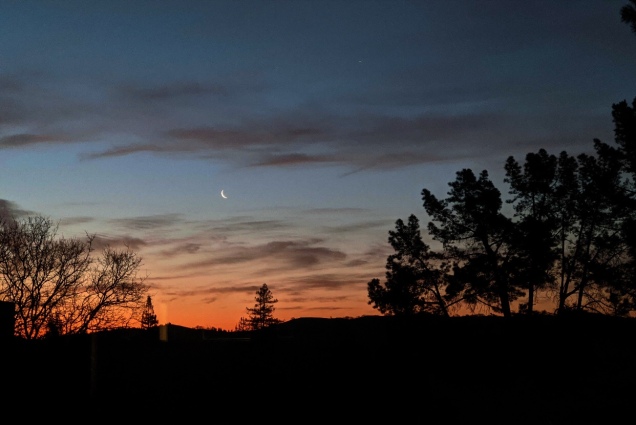 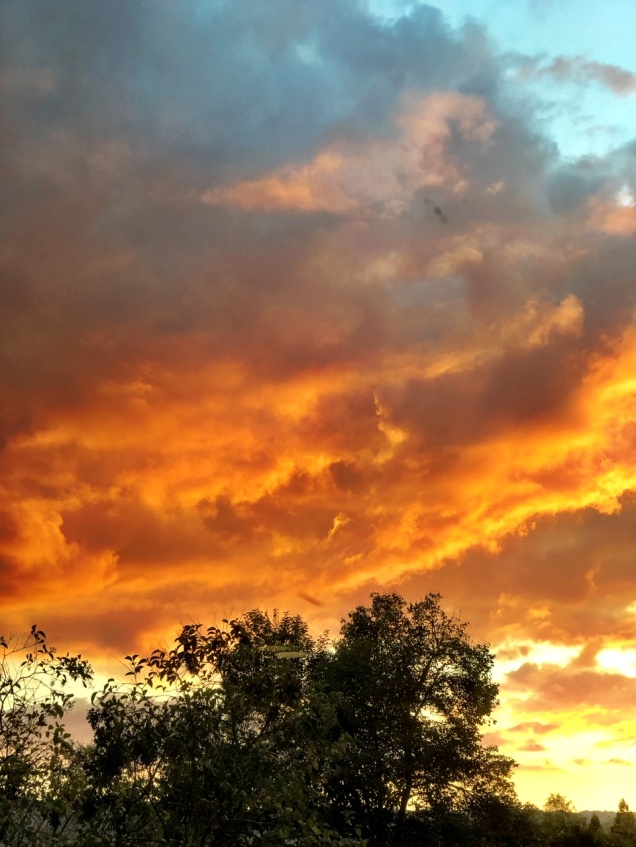 And speaking about sunsets, here, for your listening pleasure is the cover of Wes Montgomery’s “Bumpin’ on Sunset” recorded by Brian Auger’s Oblivion Express. Take ten, sit back, and enjoy.

Gaspard put down his suitcase and wiped the sweat from his brow. Finding her was clearly a bigger challenge than he had anticipated. He was definitely lost. He looked around and saw a passerby and waved at him. “Pardonnez-moi,” he said to the man. Then, in a thick French accent he said, “I am looking for a street. The name is Legosee.” Gaspard handed the man a piece of paper.

“Ah,” the man said, “It’s pronounced ‘Legacy,’ Legacy Lane.” The man pointed to his right and said, “It’s three blocks in that direction,” and handed the piece of paper back to a Gaspard.

“Merci, monsieur,” Gaspard said, tipping his hat to the man. Gaspard then picked up his suitcase, and headed in the direction of Legacy Lane.

A few minutes later Gaspard found himself standing on Legacy Lane in front of a quaint home in a quiet neighborhood. He thought to himself, I have finally found the street where you live.

He took a deep breath, gathered his wits about him, walked up to the front door, and rang the bell. “Who is there?” he heard a woman’s voice with a French accent ask.

“Vous m’avez blessé par balle et gravement. Alors tu m’as laissé là pour mourir [You shot and critically wounded me. Then you left me there to die],” he said.

Gaspard pulled out a pistol and shot the woman right between the eyes. “Les remboursements sont une chienne [Paybacks are a bitch],” he said looking down at her corpse sprawled out just inside the doorway. He put his pistol back in his pocket, picked up his suitcase, and walked away from Legacy Lane.

Written for Paula Light’s Thursday Inspiration, where the theme is “street.” Also for these prompts from yesterday: The Daily Spur (suitcase), Word of the Day Challenge (challenge), Ragtag Daily Prompt (challenge), and Fandango’s One-Word Challenge (legacy). And to those of you who actually speak French, I used Google Translate to convert English to French, so if my translation is bad, well, pardon my French.

“Wait!” Josh exclaimed. “Are you serious?”

“Unfortunately, I am,” Lauren said. “The Justice Department is dropping the charges against Trump’s first national security adviser, Michael Flynn, who pleaded guilty to lying to the FBI about his Russian contacts during the presidential transition. It’s a stunning reversal by the DOJ in its case against Flynn, even though he was convicted in special counsel Robert Mueller’s investigation. Mueller had put together a detailed outline of Russian interference in the 2016 U.S. presidential election and Flynn’s role in it.”

Josh shook his head and sighed. “It’s all politics, these days,” he said. “Trump, thanks to Barr, McConnell, and all of the Republican ass-lickers in Congress, is getting away with anything and everything.”

“What else is new?” Lauren asked. “Democracy in America died in November 2016 and Trump is now acting like he’s the king.”

Jack opened his eyes slowly, blinked a few times, and looked around the room. The first thing he noticed was a single incandescent bulb, maybe 60 watts, hanging from the ceiling. Looking around he saw that he was on a cot in a windowless room with cinderblock walls and a heavy metal door. Then he noticed three other men, also on cots, sharing this dank room with him.

“Ah, sleeping beauty has finally arisen,” Jack heard one of the men say, while the other two chuckled.

“I am a butcher,” the first man said.

Jack looked at the three men. “The universe is fucking with me,” he said, more to himself than to the three other men.”

“And who might you be?” the butcher asked Jack.

The baker interrupted Jack before he finished. “I remember once meeting someone name Jack. He was quite nimble, if I recall.”

“And very quick, too,” said the butcher.

“Yes, Jack was so nimble and so quick that he once jumped over a very large candlestick I crafted,” said the candlestick maker.”

“Okay, what is going on here?” Jack said angrily. “If this is some sort of psychological experiment, I don’t want to have anything to do with. Who do I need to talk to to get out of here?”

“And neither are you so quick,” said the butcher.

“And no matter how high you jump, Jack,” said the candlestick maker, “you’ll never get out of here.”

“What is this place?” Jack screamed.

“Welcome to hell, Jack,” the three men said in unison.

Written for the Mindlovemisery’s Menagerie Tale Weaver prompt, where we are asked to write our response to the notion of “I Remember Once.” Also for Paula Light’s Thursday Inspiration, where the theme is “universe.” And for Fandango’s One-World Challenge (experiment). And finally for Sandman’s Writing Challenge,

where the situation is “you wake up and you are imprisoned in a room with four strangers, each of a different profession. Why are you imprisoned together and what is your next plan of action?” 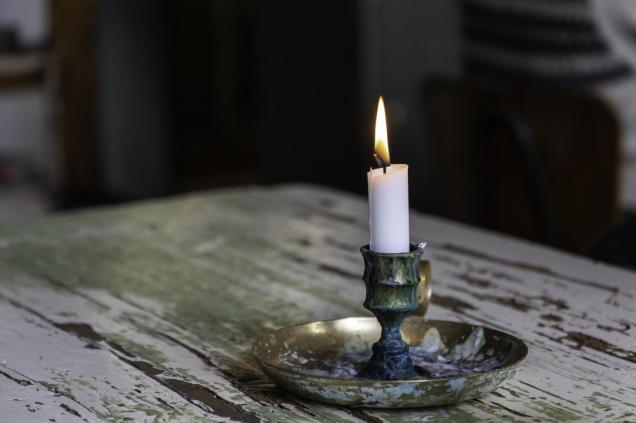 “This is it, I think,” the first mate said. “This is our last candle. I looked all over the ship because I thought we had more in storage, but we must have used them already.”

“Well, if that’s the case, I don’t know that the crew can survive living in darkness and cold until we reach our destination without some sort of divine intervention.” the captain said. “I shall go and address the men and tell them to pray to our Lord, as it will take all of our prayers if we hope to escape death and survive our journey.”

“Prayers,” the first mate said, giving a sarcastic laugh. “Yeah, that will work.”

“What else can we do?” the captain asked. “What can I tell the crew that would be more helpful than prayers?”

“Be honest with them,” the first mate said. “Tell them all to bend over and kiss their asses goodbye.”

Written for the Mindlovemisery’s Menagerie Tale Weaver prompt, where the theme is “Escape.” Also for the Flash Fiction for the Purposeful Practitioner with the image above from Morguefile.com.  And for Paula Light’s Thursday Inspiration where the theme is “prayer.” Oh, and for Fandango’s One-World Challenge (ship).