Kristian, at Tales From the Mind of Kristian, tagged me for the 321 Quote Me! Challenge, where the topic is courage.

The rules for this challenge are:

So, surprise surprise, my quotes come from two highly regarded politicians and leaders. If only our current “leaders,” like Donald Trump, Mitch McConnell, and Lindsey Graham, the rest of the Republicans in Congress, would demonstrate even an ounce of courage, we’d be so much better off.

“Men make history and not the other way around. In periods where there is no leadership, society stands still. Progress occurs when courageous, skillful leaders seize the opportunity to change things for the better.”

Okay, now it’s time to tag three other bloggers. How about:

Alrighty then. Go with courage everyone.

I originally published this post in August 2017. It only received sixteen views, got five likes, and three comments. But I really like this post and think it was under exposed and unappreciated, so I thought I’d give it a second go. I hope you enjoy it. 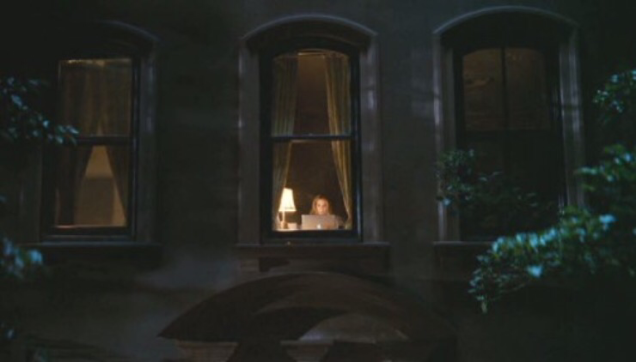 I never met the girl in the window in real life. Just in my fantasies. And now she’s gone. Maybe she moved out. Maybe she got married or moved in with her boyfriend. Maybe something bad happened to her. Maybe she died. Now I’ll never know.

I always saw her when I took my dog out for the last walk of the night, usually between 9:30 and 10:00. She would usually be sitting in front of her laptop, facing the window, a small table lamp on her right. What was she doing? Now I’ll never know.

I counted on seeing her each night. I only ever saw her face and her hair, as the rest of her was hidden behind her open laptop. She had, as far as I could tell from the other side of the street, a pretty face. Her hair was reddish blonde, or that’s what it looked like in the glow of her laptop’s screen and the light from the lamp on her desk. Now I’ll never know.

I am reasonably certain that she never noticed me and my dog. The sidewalk right across the street from her building is tree-lined and rather dark at night. Although there was that one time when she glanced up from her laptop and appeared to look out the window and directly at me. But she didn’t respond when I waved at her. Did she see me? Now I’ll never know.

I had seen her almost every night for nearly a year. I became obsessed with her. She inhabited my dreams. She was the leading lady of my fantasies. I had to somehow find the courage to meet her. I was sure that if we ever met, she would feel about me as I felt about her. Now I’ll never know.

One day very soon I would call up to her from the street right below her window and introduce myself to her. Maybe she would invite me up to her apartment and offer me a drink. Maybe tea or coffee. Maybe a beer or a glass of wine. Maybe she’d offer me something to eat. Maybe we’d hold hands, embrace one another. Now I’ll never know.

They say he who hesitates is lost. I hesitated. And now she’s gone. Now I’ll never know.

I admit it. I, too, was taken in by the illusion that maybe, just maybe, two or three Republicans in the U.S. Senate would have the integrity and courage to vote against the confirmation of Brett Kavanaugh. But I was wrong.

Not one Republican showed any courage whatsoever. Susan Collins talked about her support for Roe v. Wade and wrung her hands at Kavanaugh’s demeanor at the hearing, but in the end, she enthusiastically endorsed him and questioned the veracity of the sexual misconduct claims levied against him. Jeff Flake made a big show of demanding an FBI investigation, even though he and his Republican cronies knew that, with its limited scope, it would be a sham.

I’m even skeptical of Republican Senator Lisa Murkowski being the lone Republican senator to vote against Kavanaugh. I  have no doubt that, having secured Collins’ and Flake’s votes, and that of West Virginia (aka, “coal country”) Democrat Joe Manchin, Senate Majority Leader Mitch McConnell gave Murkowski the okay to vote no, since he didn’t need her vote to confirm Kavanaugh’s nomination.

Just look how jovial Chuck Grassley, Chairman of the Senate Judiciary Committee, is. Look at the joy on McConnell’s face. They are over the moon at what was always the inevitable outcome.

But the reality is that the political deck is stacked. The configuration of the U.S. Senate, with each of the 50 states having two senators, is such that about two-thirds of the senators represents only about one-third of country’s population. Wyoming, for example, has a total population of about 580,000 people, so its two senators each represents around 290,000 people. But the state I live in, California, is home to nearly 40 million people, so each of my senators represents the interests of 20 million people.  The second most populous state, Texas, has around 28 million people, so a Texan’s representation in the Senate is 1.42 times greater than for those in California.

The combined populations of North Dakota and South Dakota is around 1.6 million, but there are four senators representing the people of those two states. Twice the number of senators for four percent of the population of California.

And as of today, the United States Supreme Court is also disproportionately skewed to the right. So much for the concepts of a representative government and of “one man, one vote.”

My first inclination when I saw today’s one-word prompt, “courage,” was to go political and to write about the absence of courage that the Republicans in Congress have exhibited when it comes to their constitutional role to serve as a check and balance against an unhinged, autocrat-wannabe who occupies the White House.

But then, since I’ve been watching the Winter Olympics on TV, I thought I’d write about the incredible courage of those athletes who attempt what to me appears to be almost superhuman feats of athleticism as they go for the gold.

And then I thought about the courage of first responders who go charging in — whether for natural disasters like earthquakes, floods, fires, or hurricanes, or into man-made tragedies, like mass shootings and terrorist bombings — when everyone else is fleeing the scene.

There’s also the courage of whistleblowers who are willing to risk their careers — and possibly even their lives — in order to release to the public details of underhanded or illegal activities on the part of employers or even governments.

And what of the courage of women who have told their stories about sexual harassment and abuse by the rich, famous, and powerful?

But what is needed most today is the courage of everyday Americans to go out and vote at each and every election, from local and statewide elections to national elections. The courage to pay attention to the issues that matter to them and to actively support and vote for candidates who reflect their personal values.

That is the kind of courage that is critical in order to save and preserve our democracy.

This week’s Song Lyric Sunday theme is “courage.” I thought of a bunch of songs that encourage bravery, strength, and courage in the face of adversity, but I finally settled on “Carry On Wayward Son” by Kansas.

“Carry On Wayward Son” was a single written by Kerry Livgren and recorded by Kansas for their November 1976 album “Leftoverture.” In 1977, the song peaked at No. 11 on the US Billboard Hot 100.

According to Livgren, the guitarist for Kansas, the song was not written to express anything specifically religious, though it certainly expressed spiritual searching and other ideas. Livgren said that he felt a profound urge to “Carry On” and to continue the search. He saw himself as the “Wayward Son,” somewhat disconnected from the ultimate reality, and yet striving to know it. In 1980, Livgren became an evangelical Christian.

Here are the lyrics:

Once I rose above the noise and confusion
Just to get a glimpse beyond this illusion
I was soaring ever higher, but I flew too high

Though my eyes could see I still was a blind man
Though my mind could think I still was a mad man
I hear the voices when I’m dreaming,
I can hear them say

Carry on my wayward son,
There’ll be peace when you are done
Lay your weary head to rest
Don’t you cry no more

Masquerading as a man with a reason
My charade is the event of the season
And if I claim to be a wise man,
Well, it surely means that I don’t know

On a stormy sea of moving emotion
Tossed about, I’m like a ship on the ocean
I set a course for winds of fortune,
But I hear the voices say

Carry on my wayward son
There’ll be peace when you are done
Lay your weary head to rest
Don’t you cry no more no!

Carry on,
You will always remember
Carry on,
Nothing equals the splendor
Now your life’s no longer empty
Surely heaven waits for you

Carry on my wayward son
There’ll be peace when you are done
Lay your weary head to rest
Don’t you cry,
Don’t you cry no more,