I’m going to take Brian at his word. This was the last photo I took yesterday on my iPhone and I’m offering no explanation.

As I’ve previously announced, I’m going to focus my A to Z Challenge on TV shows I’ve watched and enjoyed. And since we’re going in alphabetical order, the first show I’m going to highlight is “All in the Family.”

“All in the Family” was an American sitcom television series that was originally broadcast on the CBS television network for nine seasons, from January 12, 1971, to April 8, 1979. Based on the British sitcom, “Till Death Us Do Part,” “All in the Family” was produced by Norman Lear and Bud Yorkin. It starred Carroll O’Connor, Jean Stapleton, Sally Struthers, and Rob Reiner. The show revolves around the life of a working-class father and his family.

The show was about the domestic life of the Bunkers, a lower-middle-class family living in Queens, New York. Its patriarch was Archie Bunker (O’Connor), an outspoken, narrow-minded, ever-grouchy social conservative, who held a nostalgic view of America and saw his way of life threatened by the rise of ethnic minorities, such as African Americans, Hispanics, and Jews. (Very much like many conservative Republicans of today still do).

Archie was seemingly prejudiced against everyone who was not like him or his shared his ideas about how people should be. Archie’s wife Edith (Jean Stapleton) was sweet and understanding, though somewhat naïve and uneducated. Archie often disparagingly referred to her as “dingbat.” Their only child, Gloria (Sally Struthers), was generally kind and good-natured like her mother, but displayed traces of her father’s stubbornness and temper. Gloria was a feminist who was married to graduate student Michael Stivic (Reiner), who lived with the Bunkers and who Archie referred to as “Meathead.” Stivic’s values were influenced and shaped by the counterculture of the 1960s. The two couples represented the real-life clash of values between the Greatest Generation and Baby Boomers.

“All in the Family” was considered to be a groundbreaking show due to its depiction of issues previously considered unsuitable for a U.S. network television comedy, such as racism, antisemitism, infidelity, homosexuality, women’s liberation, rape, religion, miscarriages, abortion, breast cancer, the Vietnam War, menopause, and impotence. The sitcom is often regarded in the U.S. as one of the greatest television series in history. Through depicting these controversial issues, the series arguably became one of television’s most influential comedic programs, as it was the first to inject the sitcom format with more dramatic moments and realistic, topical conflicts. 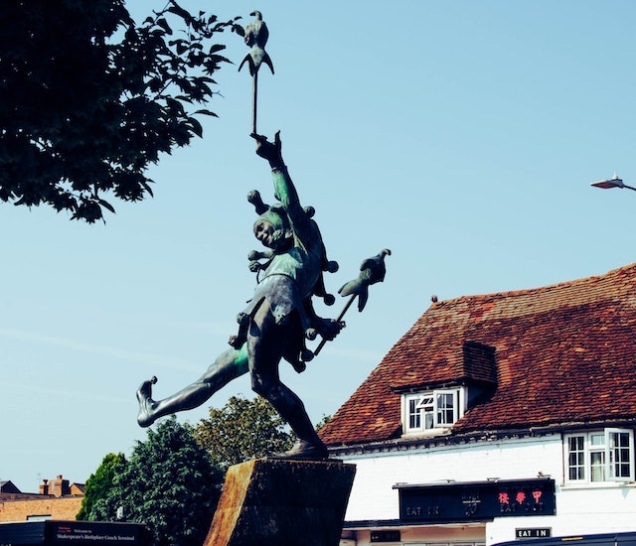 “That’s a jester, son, an entertainer from the medieval days and the renaissance period who was a member of the household of a nobleman or a king and whose job it was to entertain guests,” Gary explained to his young son who asked about the statue of man dressed in the funny outfit.

“Jesters,” Gary continued, “would typically wear a multicolored outfit with a cap with bells on it, pointy shoes with bells at the toes, and would brandish a mock scepter, like the one the jester in that statue is carrying.”

Looking a little confused, Gary’s son said, “Thanks for explaining that to me, Dad, but there’s a kid in my class named Chester and he doesn’t dress at all like that.”

Welcome to April 1, 2021 and to Fandango’s One-Word Challenge (aka, FOWC). It’s designed to fill the void after WordPress bailed on its daily one-word prompt.