“I’m gonna get up on that stage tonight and I’m gonna sing my fuckin’ heart out,” Deana said. “I’m going to be energetic, mesmerizing, dynamic, and downright nuclear. Tonight is the night that some music producer is going to hear me perform and will discover his next superstar diva.”

“Keep dreaming, Diva Deana,” Anita said. She and Deana were sitting together backstage, each awaiting their own turn to perform before the small audiences at the open mic night. “For your own emotional protection, Deana, you need to stop already with these fantasies of fame you keep happening,” Anita continued.

“You’re such a liar, Anita,” Deana said. “One day you’ll look up at a marquee and see my name up in the lights.”

“Whatever, Deana,” Anita said. But just remember, when you’re looking up at that fantasy marquee and admiring your name, who it was who told you that what goes up, must come down.”

Written for the Three Things Challenge from Di at Pensitivity101, where the three things are “up,” “down,” and “told.” Also for these daily prompts: Ragtag Daily Prompt (stage), Your Daily Word Prompt (energetic), MMA Storytime (nuclear), Fandango’s One-Word Challenge (discover), Word of the Day Challenge (protection), and The Daily Spur (liar).

Sometimes I struggle to come up with even one designated winner for Who Won the Week. But this week I struggled to choose between the hope that the approval of Pfizer’s COVID-19 vaccine and the nail in the coffin to Trump’s ludicrous attempt to reverse the results of the presidential election.

In the end I chose the Supreme Court of the United States. On Friday, the Supreme Court, in a brief order, rejected the Texas AG’s lawsuit to overturn Joe Biden’s election victory in four critical swing states. The court said that Texas did not have the legal right to sue those other states, thus ending Trump’s desperate attempt to use the Supreme Court, with its 6-3 conservative majority, including three justices appointed by Trump, to overturn the election results.

Every Sunday, Sadje, over at Keep it Alive, poses a question for us bloggers to consider. This week’s question is about New Year’s resolutions. Her question is…

Do you or do you not make new year’s resolutions?

I actually wrote a post on December 30, 2017 about New Year’s resolutions in response to a Stream of Consciousness Saturday prompt from Linda G. Hill. You can read the entire post here if you wish.

But the bottom line for me is that I don’t make New Year’s resolutions.

It’s not that I’m perfect and there’s no room for improvement. That’s far from the case. But I don’t like that feeling of failure when my resolutions to get more exercise or to eat healthier or to watch less TV inevitably fall short. So if I don’t make any New Year’s resolutions, I won’t beat myself up for not being able to keep them.

Having said that, the one resolution I do plan to keep is to continue blogging, so long as it’s still fun, fulfilling, and doesn’t become a burden.

This week I learned that the 2020 Merriam-Webster word of the year is “pandemic.” And then this was the front page of this morning’s San Francisco Chronicle. 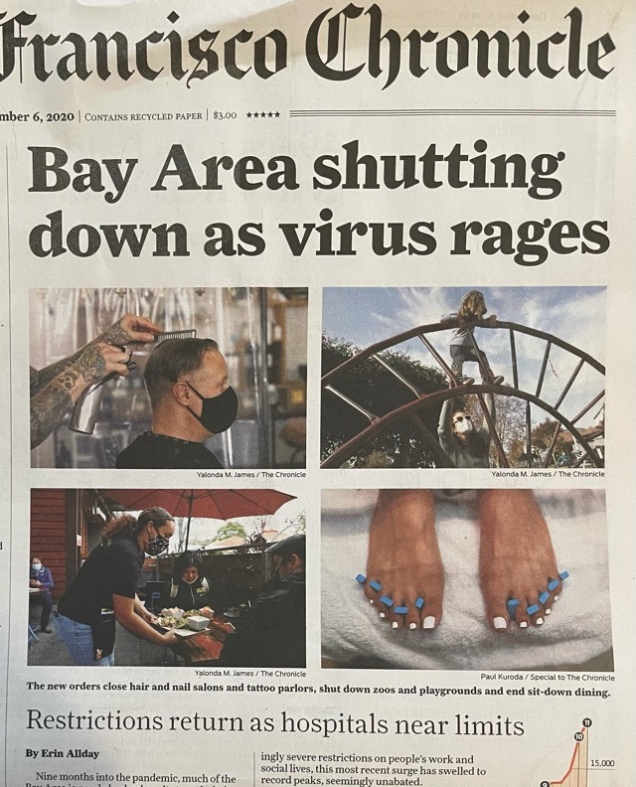 So, as much as it pains me to do so, this week’s winner of Who Won the Week is the COVID-19 pandemic.

Thanks to Donald Trump’s abysmal mismanagement of America’s response to coronavirus, his rejection of guidance from qualified scientist and medical professionals, his making wearing face masks and social distancing a political issue, and his virtually throwing in the towel on any efforts by the federal government to take steps to deal with the pandemic, the United States is going through a third surge that dwarfs the first two. As I write this, America has had more than 15 million cases and almost 290,000 deaths, far more than any other country on the globe. 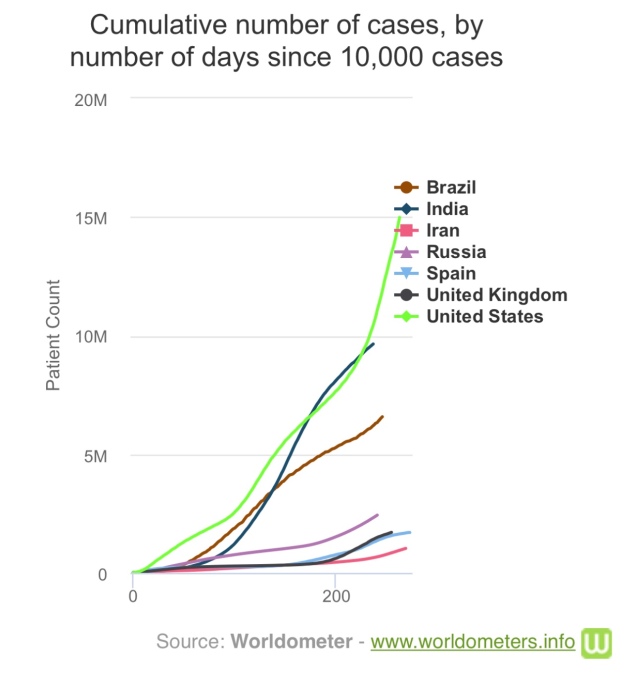 A return to “normal” is still, it seems, a long way away. Maybe never, actually. Stay safe, everyone.

So much to choose from this week, with Jim Adams giving us “banana,” “cherry,” “strawberry,” “orange,” and “olive” as the Song Lyric Sunday themes. I first thought of the Beatles’ “Strawberry Fields Forever.” Then it was the old “Yes! We Have No Bananas” song. I even thought about Little Richard’s Tutti Fruity, but the lyrics to that song don’t mention bananas, cherries, strawberries, or olives. So I finally decided to go with Neil Diamond’s “Cherry, Cherry.”

“Cherry, Cherry” was a 1966 song written, composed, and recorded by American musician Neil Diamond. Diamond got some help writing this song from Jeff Barry and Ellie Greenwich, who worked with him after he signed with Bang Records and produced the song. It started out with a guitar lick Diamond came up with that caught Barry’s ear. He and Greenwich loved it and encouraged Neil to finish the song. It was Diamond’s first big hit, reaching number 6 on the Billboard Hot 100 chart. After the song became a hit, Diamond’s songs were in demand. This led to The Monkees recording of Diamond’s “I’m A Believer,” which was the biggest hit of 1967.

And, by the way, contrary to what the above video says, Neil Diamond was finally inducted into the Rock and Roll Hall of Fame in March 2011.

Jeff Barry said that the song was originally titled “Money, Money,” but he and Bang records owner Bert Berns persuaded Diamond to make it lighter and more teen-friendly. There are no drums in this song. The version you hear was intended as a demo, with hand claps providing the drum beat. Diamond recorded the demo with Barry and Greenwich on backing vocals and with Artie Butler on piano and Hammond organ. When they recorded the song in an official session complete with horns and drums, they couldn’t capture the exuberance of the demo.

Here are the lyrics to “Cherry, Cherry.”

Baby loves me
Yes, yes she does
Ah, the girl’s outta sight, yeah
Says she loves me

Yes, yes she does
Gonna show me tonight, yeah

Tell your mamma, girl, I can’t stay long
We got things we gotta catch up on
Mmmm, you know
You know what I’m sayin’

Can’t stand still while the music is playin’
why ‘ain’t got no right
No, no you don’t
Ah, to be so exciting

Won’t need bright lights
No, no we won’t
Gonna make our own lighting

No, we won’t tell a soul where we gone to
Girl, we do whatever we want to
Ah, I love the way that you do me
Cherry, babe, you really get to me