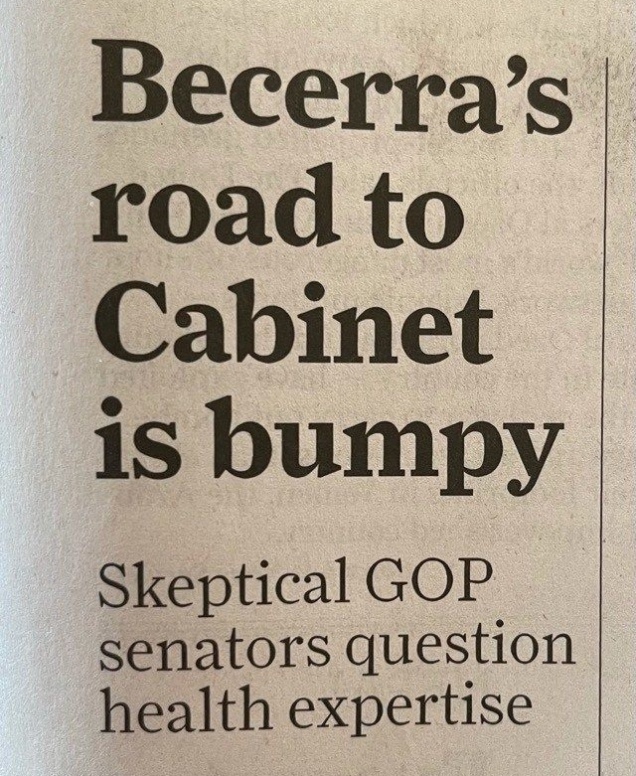 When I saw this article on the front page of this morning’s paper and read the sub-headline saying that “Skeptical GOP senators question health expertise,” I thought to myself, “Seriously? How hypocritical can these assholes be?”

Joe Biden has selected California’s Attorney General Xavier Becerra to be his nominee for the cabinet-level position of Secretary of Health and Human Services.

Becerra, a graduate of Stanford University and Stanford Law School, served in the U.S. House of Representatives from 1993 to 2017 before he was appointed California’s Attorney General to replace Kamala Harris after her successful run for the U.S. Senate four years ago.

And yet some Senate Republicans seem to have reservations about Becerra’s nomination as HHS secretary, indicating that Biden’s pick may encounter resistance during the confirmation process.

I find this quite ironic. Over the past four years, the Republican majority in the Senate has confirmed a whole host of unqualified, inexperienced judges to the federal courts, including three of Donald Trump’s nominees to the Supreme Court. They also confirmed his nominees to various cabinet-level positions even though their primary qualifications for the job were that they were large donors to Trump’s campaign and/or were unabashed Trump butt-lickers who would do Trump’s bidding without pushback.

After four years of gross incompetence and corruption within the the Trump administration, it’s refreshing that Biden is seeking to fill key positions in his administration with qualified, competent, experienced, and diverse individuals.

I can’t quite fathom the gall of Republicans in the Senate to question the caliber of Biden’s nominees and threaten to withhold confirmation when their skepticism was suspended for every single one Trump’s judicial and cabinet nominees over the past four years.