Every Monday, Paula Light, with her The Monday Peeve post, gives us an opportunity to vent or rant about something that pisses us off. Today my peeve is directed at technology that doesn’t work as it is supposed to.

From my perspective, when it comes to technology, 2020 has not been a good year, which is not at all surprising, since 2020 has been a particularly shitty year in most respects.

From a technology standpoint, WordPress launched its block editor and decommissioned its classic editor. It also released a buggy version 16 update to the iOS app for the iPhone, which won’t allow me to like or comment on a number of blog posts from the Reader. And other software apps have released upgrades that are anything but improvements over earlier versions.

The latest example of technological frustration for me has been going on for the past week. You may recall that at the end of last December I had surgery to remove a middle ear growth in my left ear. The surgery successfully removed the growth, but not before it destroyed a tiny bone in my middle ear that connects the ear drum to the inner ear. Without that tiny bone, sound waves that vibrate the ear drum don’t reach the inner ear, which means that sounds don’t reach the brain. As I result, I am deaf in my left ear.

This has created a problem between me and my wife. In order to hear the dialogue while we’re watching TV together, I have to turn the volume up. But my wife complains that it’s way too loud. We’ve tried close captions, but my wife finds them annoying and distracting. And I find that reading the text distracts from seeing what’s happening on screen. Further, closed captions don’t work very well for live TV, like cable news.

I did some research and ended up buying this wireless headphones/transmitter set, which claims to work with virtually any TV, audio receiver, and cable box configuration. 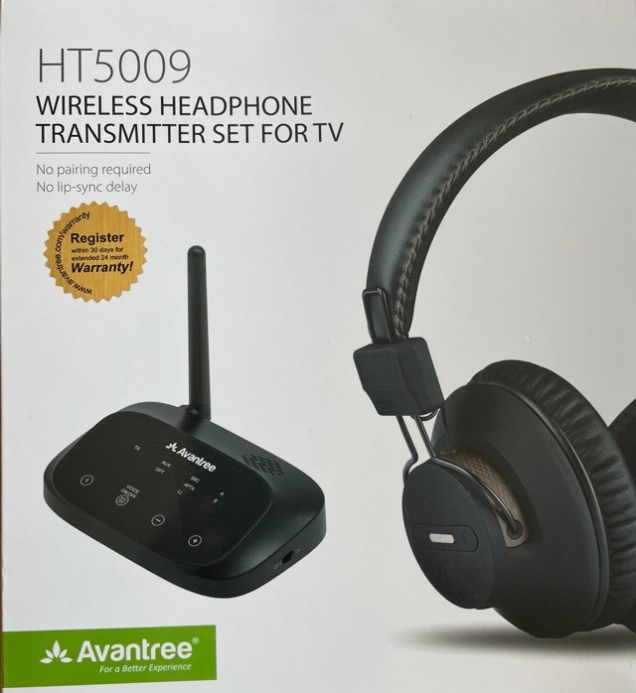 Well, maybe except mine. I admit that my configuration is complicated. I’ve got a wall-mounted hi-def TV that is connected via an HDMI cable in the wall to my stereo audio receiver, which then connects to my cable box.

I followed all of the detailed instructions that came with the device and everything seemed to be set up correctly. But I could either hear the audio through the headphones or via the speakers, but not through both at the same time.

I’ve had four calls with the tech support team from the makers of the wireless transmitter, but so far they have been unable to get the headphones and speakers to work simultaneously. This morning, after yet another hour on the phone, I was asked to send them pictures of the back of my TV, the connections on my audio receiver and those of my cable box. I was also asked to send photos of how my sound was configured on my TV’s settings.

I’ll give them one more chance to figure out how to get this technology to work as advertised. If not, I’ll send it back and hope my wife and I can figure out how to watch TV together so that I can hear and she doesn’t feel like she being blasted out of the room. Either that or one of us will be sent to our room to watch TV.

21 thoughts on “The Monday Peeve — Technology”