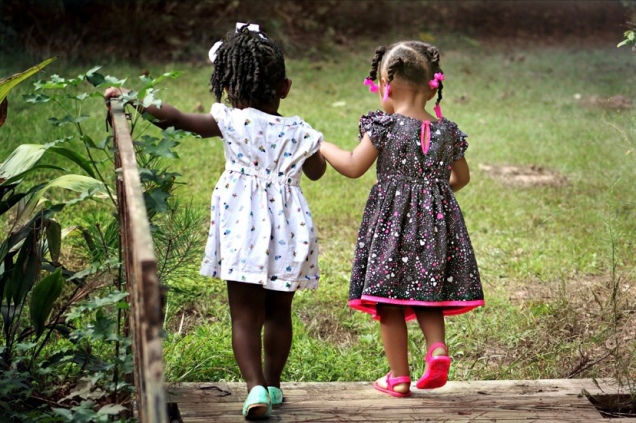 They were cousins, born just four months apart. They were closer than any two sisters you could imagine, but yet they were about as different as two little girls could possibly be. Maybe that was why they were close to inseparable and played so well together.

Until that one weekend when the two little cousins, hand-in-hand, wandered off. The sister who had them for the weekend realized that she hadn’t seen or heard the girls for more than an hour. She called out their names, but there was no response. She went through every room in her house hoping to find them. But they were nowhere to be found.

She ran outside to the front yard to see if they were outside playing there. They weren’t. Then she ran to the back of the house. They were not there, either. She began screaming their names at the top of her lungs, but heard only silence in return.

She called her husband, who had gone to the hardware store, and told him the cousins were missing. He quickly drove home and joined his wife as they fanned out into the neighborhood to see if they could find the little girls. But they didn’t find them. Anywhere.

Written for the What Do You See? prompt from Sadje at Keep it Alive. Photo credit: Cheryl Holt at Pixabay.

Rory, over at A Guy Called Bloke, has this monthly “thing” he does where he poses 12, oh I don’t know, irreverent questions. Here is what he is asking us this month.

1 – When not specifically following ‘set’ directions, everyone has a favorite direction they prefer to walk in. Which is yours — left or right? And why do you think you always want to go that direction first?

To be honest, I don’t really have a favorite direction. I subscribe to the mathematical fact that the shortest distance between two points is a straight line. Hence, I will go in whatever direction will get me to my objective most efficiently and quickly.

2 – What’s the creepiest thing that has ever happened to you – irrelevant to your personal beliefs – just something that creeped you out – and yet you simply couldn’t explain it?

It creeps me out that more than 74 million Americans voted to give Donald Trump another four years in office. What the fuck is wrong with those people? The good news is that more than 81 million sane, rational, and responsible Americans voted for Trump’s opponent, Joe Biden. It also creeps me out that a month after the election, Donald Trump has yet to admit that he lost. He’s mad, and I don’t mean in the angry sense, I mean in the crazy sense.

3 – Who are your top five actors/actresses and what is special about them to you?

As far as living actors, Tom Hanks and Meryl Streep have to be up there. As to those who are no longer with us, I have always enjoyed the work of Kathryn Hepburn, who, as Humphrey Bogart said, was a classy dame. And, of course, there is the aforementioned Humphrey Bogart, as well as Paul Newman and Gregory Peck. Okay, that’s six. Sorry about that.

4- Which prompts do you participate in weekly with your blog – please list?

As to weekly prompts, I always do Linda G. Hill’s One-Liner Wednesday and Stream of Consciousness Saturday prompts. And then there’s Melanie’s Share Your World prompt, Dr. Tanya’s Blogging Insights prompt, Jim Adam’s Song Lyric Sunday prompt. More recently there’s the Fibbing Friday prompt that Di (Pensitivity101) and Frank (PCGuy) alternate, as well as Frank’s Truthful Tuesday prompt. I often do Rochelle Wisoff-Fields’ Friday Fictioneers prompt and Sadje’s What Do You See? prompt. And, when I have time, I participate in some of the Mindlovemisery Menagerie prompts, like Sunday Writing Prompt, Photo Challenge, Tale Weaver, Music Challenge, First Line Friday, and a few others. And lest I forget, there’s Shweta Suresh’s Saturday Six Word Story Prompt, and Sammi Cox’s Weekend Writing Prompt. Plus a bunch of daily prompts. Whew, I’m tired just thinking about it.

5 – Have you taken the 16 Personalities Test and if so, what Personality Type are you and how accurate is it to you?

Yes, I just followed the link and took it. It says I’m an ISTP-A. That means I tend toward being introverted, I’m more observant than intuitive, I’m more of a thinker than a feeler, I’m more prospective than judgmental, and I’m more assertive with respect to my confidence and decision making than I am “turbulent.” How accurate is that? Well, since I would describe myself as a practical pragmatist, I’d say it’s spot on.

6 – Are you easily embarrassed? When was the last time for you?

7 – Has anything shocked you in the last 6 weeks to the point where you have gasped out aloud? If so what was it and if not, then when was the last time you were terribly shocked by something?

Even though I’m not surprised, I have to admit that I’m still kinda shocked at the way most Republicans in Congress continue to stand by Donald Trump’s unfounded assertion that the election was rigged and fraudulent and that he won. And I’m shocked that so many Americans are still buying into the bullshit and the Trump has managed to raise more than $170 million from these gullible lemmings since the election in order to, I don’t know, line his own pockets.

8 – If you have one, what is your signature dish? If you don’t have one what would you love to be able to cook wonderfully well?

It’s no great accomplishment, and I don’t know if I’d call it my “signature dish,” but I do like cooking (and eating) what I call hole-in-the wall eggs.

9 – Strangest or wildest place you ever had the most amazing sex in or on maybe, even around …….?

Just off of a busy walking path in Potomac Park not far from the Jefferson Memorial in Washington, DC. There were a few trees and bushes that were blocking at least some of the view from passersby. I think.

Is flirting healthy? I don’t know that it is. And at my age, I have pretty much abandoned flirting altogether.

12 – Are you on Santa’s Naughty or Nice list and if you are, what have you asked for from either?

Santa’s list? Seriously, Rory? I’m no longer five years old, although if Santa did exist, I would ask him if I could be five years old again.

“The amount of sleep required by the average person is five minutes more.”

Last week I asked for some suggestions for potential provocative questions and a few of you came through with some good ones. This one comes from Paula Light over at Light Motifs II.

Her question revolves around interpersonal relationships. She asks…

When it comes to your friends, your spouse, your significant other, or members of your family, is it better to confront them about things they say or do that bother or upset you or is it better to try to ignore those things in order to maintain peace in your relationship?

Welcome to December 2, 2020 and to Fandango’s One-Word Challenge (aka, FOWC). It’s designed to fill the void after WordPress bailed on its daily one-word prompt.