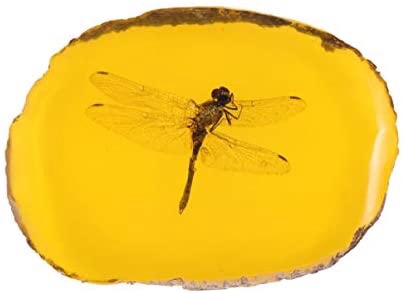 Rebecca held up the small sliver of amber rock to a candle and fixedly gazed at the dragonfly that was embedded within it. She cried as she imagined how the poor creature must have suffered when it got trapped in the amber. She took it to her father and asked him whether the insect had felt any pain.

“Sweetie,” her father said, “insects can be dated back to the Cretaceous period, which occurred 99 million years ago. The rock you’re holding is amber, which is fossilized tree resin. It started out as dribbles of plant sap, perhaps fallen to the forest floor in sticky blobs. Once buried in sediment, the sap underwent molecular polymerization, hardening under heat and pressure to form, first, an intermediate substance known as copal, and then amber itself. But while still freshly exuded and viscous, it sometimes ensnared a hapless passing creature, trapping it forever. That said, honey, I am sure that this prehistoric dragonfly didn’t suffer when it became entrapped in its amber tomb.”

“Thank you, Daddy,” she said. Rebecca turned and hurried back to her room. She reminded herself to stop going to her father when she had questions. He always over-answered her, even when she was simply looking for a yes or no response. But as a microbiologist, her father seemed incapable of offering a simple answer. Instead, he tormented her with way too much information for a little girl her age.

Written for the Mindlovemisery’s Menagerie Sunday Writing Prompt, when we are charged with writing a post about being tormented. Also for the Ragtag Daily Prompt (amber) and the Word of the Day Challenge (candle).

12 thoughts on “Sunday Writing Prompt — Too Much Information”