This is the headline that popped up in my newsfeed this morning. 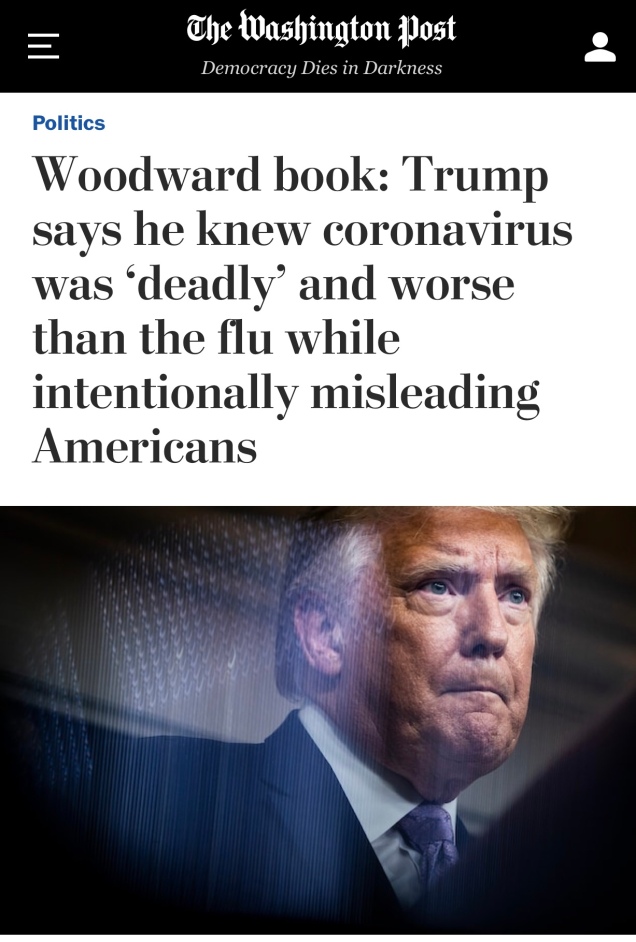 I’d call our president irresponsible, but given that the United States has had more than 6.5 million cases and nearly 195,000 deaths from COVID-19, irresponsible is not a strong enough word. Despicable is a much more apt word. Maybe even criminal.

In February and early March, Trump was telling the nation that the virus was no worse than a seasonal flu. He predicting it would soon disappear and insisted that the U.S. government had it totally under control. It was only after the evidence clearly showed otherwise that he would publicly acknowledge that the virus was no ordinary flu and that it could be transmitted through the air.

Trump called Bob Woodward in February and revealed that he thought the situation was far more dire than what he had been saying publicly. “You just breathe the air and that’s how it’s passed,” Trump said. “And so that’s a very tricky one. That’s a very delicate one. It’s also more deadly than even your strenuous flu. This is deadly stuff,” he repeated for emphasis.

On March 19th, Trump admitted to Woodward that he deliberately minimized the danger. “I wanted to always play it down,” he said.

This is the same man who, it was recently revealed, called members of the American military who lost their lives or were wounded in battle “losers” and “suckers,” and who has yet to take Putin to task for allegedly offering bounties for killing U.S. soldiers in Afghanistan.

And if that’s not enough, yesterday the delusional occupant of the Oval Office declared himself to be “a great environmentalist.” This despite the fact that he has sought to weaken or roll back roughly 100 environmental regulations since he became president. Most genuine environmentalists agree that Trump has been the worst president for our environment in history.

The fact that this man holds the highest office in the land and is seeking re-election is unconscionable.

12 thoughts on “Irresponsible is Not a Strong Enough Word”