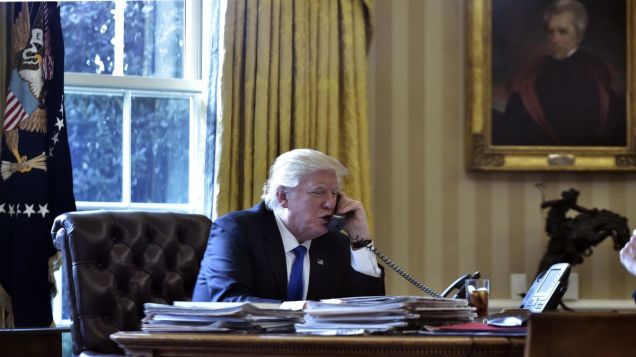 If this report yesterday from CNN is true, I don’t see how anyone — even Republicans — can continue to stick their heads in the sand and deny that our president is a traitor to his country.

According to the legendary Watergate journalist Carl Bernstein, in hundreds of highly classified phone calls with foreign heads of state, Donald Trump was so consistently unprepared for discussion of serious issues, so often outplayed in his conversations with powerful leaders like Russia’s Vladimir Putin and Turkey’s Recep Erdogan, and so abusive to leaders of America’s principal allies, that the calls helped convince some senior US officials — including his former secretaries of state and defense, two national security advisers and his longest-serving chief of staff — that the Trump posed a danger to the national security of the United States, according to White House and intelligence officials intimately familiar with the contents of the conversations.

Trump regularly bullied and demeaned the leaders of America’s principal allies, especially two women: telling Prime Minister Theresa May of the United Kingdom she was weak and lacked courage; and telling German Chancellor Angela Merkel that she was “stupid.”

Trump incessantly boasted to his fellow heads of state, including Saudi Arabia’s autocratic royal heir Mohammed bin Salman and North Korean dictator Kim Jong Un, about his own wealth, genius, “great” accomplishments as President, and the “idiocy” of his Oval Office predecessors, according to the sources.

The calls caused former top Trump deputies — including national security advisers H.R. McMaster and John Bolton, Defense Secretary James Mattis, Secretary of State Rex Tillerson, and White House chief of staff John Kelly, as well as intelligence officials — to conclude that Trump was often “delusional,” as two sources put it, in his dealings with foreign leaders. The sources said there was little evidence that the President became more skillful or competent in his telephone conversations with most heads of state over time. Rather, he continued to believe that he could either charm, jawbone, or bully almost any foreign leader into capitulating to his will, and often pursued goals more attuned to his own agenda than what many of his senior advisers considered the national interest.

Bear in mind that yesterday’s CNN report followed hot on the heels of Friday’s New York Times blockbuster report that Russia offered bounties to Taliban-linked militants for killing coalition forces in Afghanistan — including targeting American troops. The Times article went on to report that Trump and the White House’s National Security Council discussed the problem at an interagency meeting in late March.

What has Trump done in response to learning in March that Russia was paying to have American soldiers killed? Absolutely nothing. Why not? Because the President of the United States is a traitor to his country.