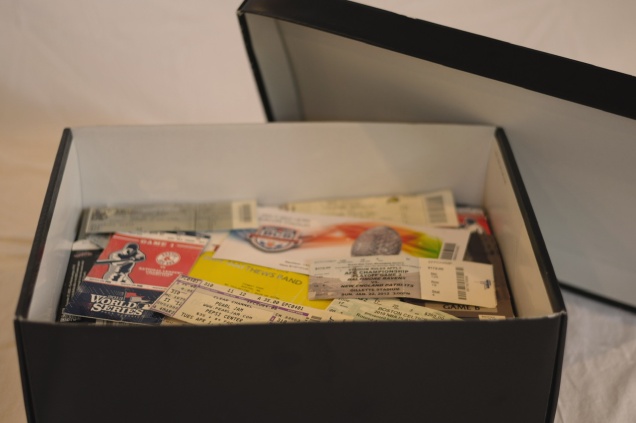 Sally opened up the old shoebox and was suddenly overcome. Sally’s daughter, Diane, ran across the room when she heard her mother’s gasp. “Mom, what’s wrong?”

Gathering herself together, Sally said, “I’m fine, sweetie. I was just taken aback a little when I opened up this old shoebox.”

Sally let out a deep sigh. “Ticket stubs,” she said. “I didn’t realize that, after all these years, your father had kept them all. They’re from most of the sporting events, concerts, and shows he and I went to when we were younger. I didn’t realize that he was such a sentimental old coot and that he kept all of these as mementos.”

Diane gave her mother a hug. “What wonderful memories seeing these old ticket stubs must bring for you.”

“Are you kidding me?” Sally said. “Your father was one selfish son of a bitch. The only thing these ticket stubs remind me of is that the games and concerts we went to were those he wanted to go to. Look at these stubs. Football games, baseball games, and basketball games. I hated sports. And Pearl Jam, for crissake! Who the hell likes Pearl Jam?”

Diane burst out laughing. “Okay, Mom, I just learned something about dad that I never knew before. So what do you want to do with this shoebox full of ticket stubs?”

“As far as I am concerned, you can burn it,” Sally said. “That way his mementos can join your father in hell.”

Written for the Tale Weaver prompt from Mindlovemisery’s, where we are ask to write our response to the word “Tickets.”