As I was casually browsing my newsfeed today I saw two things I felt compelled to share. First, was this political cartoon from Rob Rogers of Andrews McMeel Syndication.

Late last month Donald Trump started trying to redefine coronavirus as a foreign threat (“the Chinese virus”) and himself as a wartime president defending the nation against what amounts to an invasion.

As the crisis deepened, Trump has likened the pandemic to a war. He said, “We’re at war, in a true sense we’re at war, and we are fighting an invisible enemy.”

And now he has vowed, via an executive order, to suspend all immigration into the United States during the coronavirus outbreak, which is kind of ironic, given that the U.S. has, far and away, the largest outbreak of COVID-19 cases and deaths of any nation on the globe. I would think most people from other countries would elect to ban themselves from coming to the U.S. given the statistics.

The second thing I saw was this now iconic photo from AP photographer Joshua A Bickel showing angry people protesting stay-at-home mandates and social distancing rules at the state house in Columbus, Ohio. 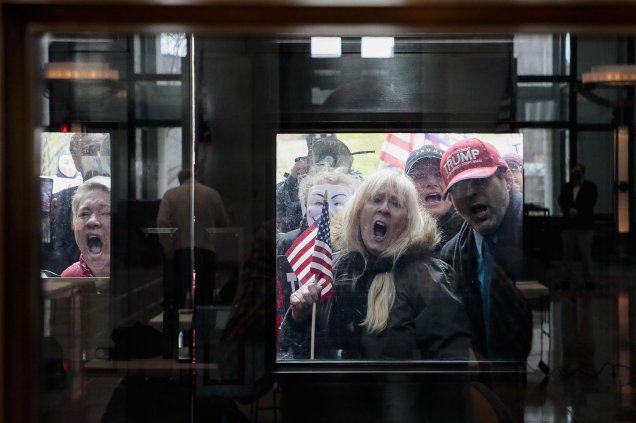 They were crowding in and pressing up against glass windows, with expressions on their faces that, to me, made it look like we are in the midst of a real life zombie apocalypse.

According to the American Dictionary, a zombie is someone who moves around as if unconscious while being controlled by someone else.

Hmm, that sounds about right. These rabid Trump supportes do seem to be brainless, semi-conscious, and are being controlled by someone else.

16 thoughts on “Our Wartime President and the Zombie Apocalypse”