The President of the United States is openly calling for an armed insurrection in his own country. He tweeted these this morning. 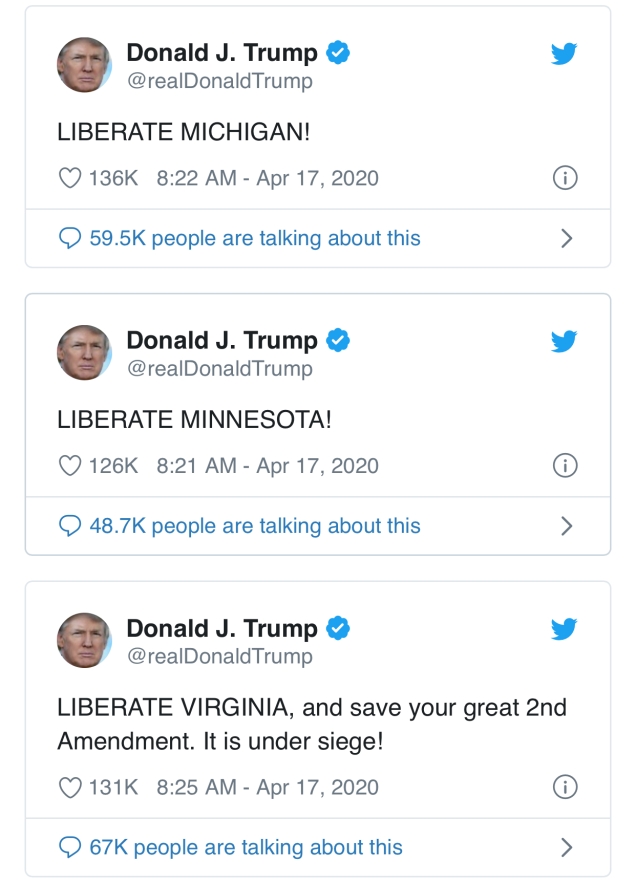 These tweets clearly are meant to encourage protests against stay-at-home orders in 2020 election battleground states with Democratic governors, appearing to try to take advantage of public restlessness amid the coronavirus pandemic.

Trump’s tweets have pushed many online extremist communities to speculate that he is blatantly pushing for armed conflict, an event they’ve termed “the boogaloo,” for which many far-right activists have been gearing up and advocating since last year.

“Boogaloo” is a term used by extremists to refer to an armed insurrection, a shortened version of “Civil War 2: Electric Boogaloo,” which was coined on the extremist message board 4chan and has been embraced by QAnon, a far-right conspiracy organization claiming there is a supposed secret plot by an alleged “deep state” against Trump.

I’m sorry, folks, if you think I’m sounding like the little boy who cried wolf, but I’m telling you again that the American democracy is dead. This is not a flash fiction post. I think it’s unlikely that there will be a free and fair election in November. And if, by some miracle, there is an election at all, and Trump loses, he will not slink off quietly into the night.

His unhinged tweets today calling for people to “liberate” states will only be the beginning and they will get worse and it will ultimately lead to violence.

Putin is, no doubt, licking his chops as America disintegrates from within and the American “Electric Boogaloo” gets underway.

Lately things have really been getting me down and sometimes it’s almost too much for me to take. But I found a place at the top of the stairs where I can go and let all of my cares drift off into space as I watch the stars put on a show for free. It’s beautiful and peaceful as can be and nothing bothers me when I’m there. It’s like a paradise, one that is trouble proof. And if this world starts getting you down, too, won’t you join me? There’s room enough for two up on the roof.

Inspired by the photo from Roger Bultot and by the words of Carole King and Gerry Goffin, this post is for the Friday Fictioneers prompt from Rochelle Wisoff-Fields.

I don’t know if it can be done, but I’m going to give it the old college try. Here’s my April 17th adage and it starts with the letter O.

If you’ve been blogging for less than a year, go ahead and choose a post that you previously published on this day (the 17th) of any month within the past year and link to that post in a comment.

This was originally posted on April 17, 2010 on my old blog. I wrote about some news stories at the time that I found of interest. Oh my how times have changed over the past decade.

Did you hear about the two-headed found at a reptile park in Australia? The lizard doesn’t just have two heads, it has a set of forelegs on either side of each head and is even able to eat with both mouths. Sadly for the lizard, it probably won’t live that long because the heads don’t get along. It seems that the larger of the two heads has a tendency to attack the smaller head.

So much for that old adage about two heads being better than one.

Then there’s the story of the 14-year old Providence, RI girl who stabbed her 30-year old mother in the chest over an argument about the girl’s cell phone. Apparently the teenager was angry that her mother took away her cell phone when her mother found out that she was taking “provocative” pictures of herself and sending these pictures to her friends’ cell phones, a practice known as “sexting.”

The two were arguing about the phone when the mother allegedly hit the girl with it, and in what some might consider to be a perfectly understandable and reasonable response given the gravity of the issue, the girl plunged a kitchen knife deep into her mother’s chest. When the police arrived they found the daughter chatting on the phone in the basement while her mother slumped, breathless and unable to speak, in the doorway of the apartment.

Don’t stories like this about the special bond that is shared between a mother and daughter make you feel warm and tingly all over?

Over My Dead Body

Speaking about special mother/daughter relationships, a German mother and daughter apparently placed their dearly departed husband/father in a wheel chair, put a large pair of sunglasses on his head, and attempted to board him on a flight from Liverpool to Berlin. The dead man’s wife claimed that he must have died as he was being wheeled into the airport, but authorities suspected that this real-life Weekend at Bernie’s-like stunt was staged in order for the family to avoid having to pay a $5,000 repatriation fee in order to hold the funeral in Germany.

Yet Another Virgin Mary Sighting 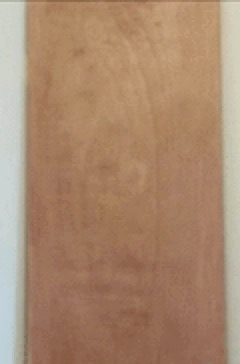 It seems that Virgin Mary sightings have turned into normal, everyday events.  A Durham, NC woman claimed that the Virgin Mary appeared on her bedroom door. (I don’t see an image of the Virgin Mary on that door, do you?) Anyway, as word spread, hundreds flocked to her apartment to get a glimpse of the holy door. Now she’s trying to decide whether or not to turn her bedroom into a chapel. What a shocker that she hasn’t tried to sell the door on eBay!

Bingo is a popular game and fund-raising event, particularly among church groups and the elderly. But it has recently started to gain popularity with the high school crowd, although with a bit of a twist.

The Pueblo (Colorado) South High school band decided to stage a bingo event to raise money, but instead of using traditional bingo cards and chips, they enlisted a cow, a goat, and a pig. The promoters plotted out 3,000 squares on a field. Participants could buy a square for $5 apiece and, believe it or not, nearly all of them were sold. If any of the farm animals took a dump on a square, the buyer of that square won Cow Pie Bingo. A cow dump was worth $1,000, a goat dump $500, and a pig dump $250.

Welcome to April 17, 2020 and to Fandango’s One-Word Challenge (aka, FOWC). It’s designed to fill the void after WordPress bailed on its daily one-word prompt.