If you’ve been blogging for less than a year, go ahead and choose a post that you previously published on this day (the 15th) of any month within the past year and link to that post in a comment.

This was originally posted on November 15, 2010 in my old, now defunct blog. It is, admittedly, a bit dated, as it refers to Sarah Palin. Remember her? I also removed the links to the Zogby poll and to the ABC News/Washington Post poll, as those links are no longer available.

I’ve got some good news for you and some bad news. According to a recent Zogby poll, 37% of Americans say they believe in ghosts. And according to an ABC News/Washington Post poll, 27% of American voters say Sarah Palin is qualified to be president. 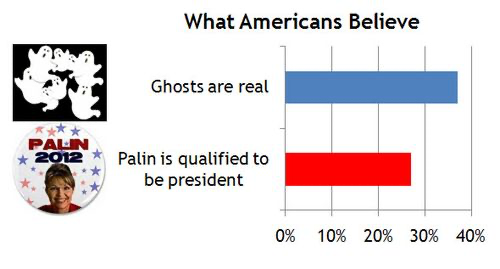 But I guess that’s to be expected. After all, most Americans are Christian and most are taught, according to Christian mythology, that Jesus had a god as his father and a human woman — who also happened to be a virgin — as his mother. They’re also taught that an elderly man built a huge ark and loaded it up with one pair of each living creature on Earth that he somehow rounded up, and while God flooded the entire planet, this guy and his menagerie sailed around for forty days and nights until the flood waters receded.

I could go on and on, but beliefs such as these certainly make it plausible that more than a third of Americans actually believe in ghosts.

(Editorial post script: It occurred to me after I re-read the draft of this post that some people might take offense at what appears to be my singling out Christianity for its strange mythologies and somewhat absurd beliefs. The reason I did so is because four out of five Americans identify themselves as Christians, and since this post is referencing to what Americans believe, I used Christianity to illustrate my point. The fact is that, as an atheist, I find the mythologies, beliefs, and superstitions of virtually all recognized religions of the world to be pretty much equally absurd. But that doesn’t mean I don’t believe that each person has a right to believe or not believe in anything he or she chooses — including believing in ghosts, holy and otherwise. Hey, whatever floats your ark.) 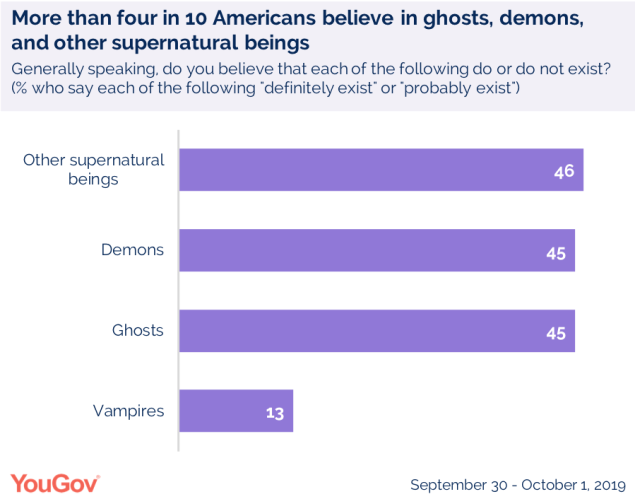