I have attempted to reblog this post from Jill Dennison because, if you have any interest in geopolitics, it’s definitely worth reading. But for some reason, my reblog button is simply not working. Damn you WordPress!

So because I feel this is such an important topic, I ended up copying and pasting her post below.

Please take a few minutes to read this.

Donald Trump likes ‘tough’ talk, and apparently thinks it is becoming to sound like a B-grade actor trying out for the role of one of Don Corleone’s sons in The Godfather.  This could be forgiven or overlooked if he were a teenager still trying to impress girls despite his pimply face and false bravado.  But no, he is 73 years of age, and more importantly, holds the highest office in the government of a nation of 330 million people.  We don’t need a mafioso-sounding idiot running the nation … we need intellect and compassion, neither of which Trump possesses.

“Saudi Arabia oil supply was attacked. There is reason to believe that we know the culprit, are locked and loaded depending on verification, but are waiting to hear from the Kingdom as to who they believe was the cause of this attack, and under what terms we would proceed!”

On Saturday, Trump actually called Crown Prince bin Salman to offer U.S. military support.  Besides the aforementioned Cagney-style speech, there is much wrong with this entire scenario.  The first, and most obvious, is that Saudi Arabia is not a member of NATO and thus we have no obligation to come to their defense.

Second, although the U.S. and Saudi Arabia are strategic allies, Saudi Arabia are by no means our friends.  Remember how Saudi Crown Prince Mohammad bin Salman ordered the brutal slaying of Washington Post journalist Jamal Khashoggi last October?  That was not an act of friendship.

Third, Houthi rebels in Yemen have claimed responsibility for the attacks on the Saudi oil facilities last weekend, and yet, out of his posterior Trump pulls the idea that he thinks Iran is to blame.  The Saudis have also claimed that they believe it was Iranian weapons that attacked, but with no proof whatsoever.  Within hours of the attack, Secretary of State Mike Pompeo, despite the fact that Yemen’s Houthis had claimed responsibility, and with not a single shred of evidence, said …

“Iran has now launched an unprecedented attack on the world’s energy supply.”

Fourth, it is not up to Donald Trump, even as president, to start a war all by himself.  It requires an act of Congress.  The U.S. Constitution, Article I, section 8, clauses 11–16 give Congress the authority to declare war.  The framers of the Constitution were reluctant to concentrate too much influence in the hands of too few, and thus denied the office of the President the authority to go to war unilaterally. If America was going to survive as a republic, they reasoned, declarations of war required careful debate in open forums among the public’s representatives.

Under the War Powers Resolution of 1973, the U.S. President can send the Armed Forces into action abroad only by declaration of war by Congress, “statutory authorization,” or in case of “a national emergency created by attack upon the United States, its territories or possessions, or its armed forces.”  It requires the President to notify Congress within 48 hours of committing armed forces to military action and forbids armed forces from remaining for more than 60 days, with a further 30-day withdrawal period.

When Trump won the presidency in 2016, few countries were as happy as Saudi Arabia. The Saudis had felt neglected and dismissed under Trump’s Democratic predecessor, Barack Obama, who had prioritized reaching out to Iran, Saudi Arabia’s regional arch-rival.

They hoped Trump would be friendlier to their interests, and in many ways, he has delivered: signing off on weapons deals, abandoning the Iran nuclear deal and downplaying the Saudi state’s human rights abuses. Trump even made Saudi Arabia the first foreign country he visited, famously posing in front of a glowing orb with Saudi royals during a conference on fighting terrorism.  And then, there was Jamal Khashoggi.  Though U.S. intelligence services confirmed that bin Salman had ordered the killing, Trump said he doesn’t care if the Saudi crown prince played a role because Saudi Arabia is an important ally, one that buys a lot of U.S. weapons and is a key global oil producer.  And if all that isn’t enough, keep in mind that 15 of the 19 hijackers on 11 September 2001 were Saudi nationals.

The implication that the royal family in Riyadh will dictate U.S. actions has many up in arms.

And, there is, as there always is where Donald Trump is involved, sheer irony and contradictions run amok.  For example, in 1987, he paid nearly $100,000 for full-page ads in The Washington Post, the New York Times and Boston Globe that spotlighted Saudi Arabia as a country that was taking advantage of the United States’ patronage. 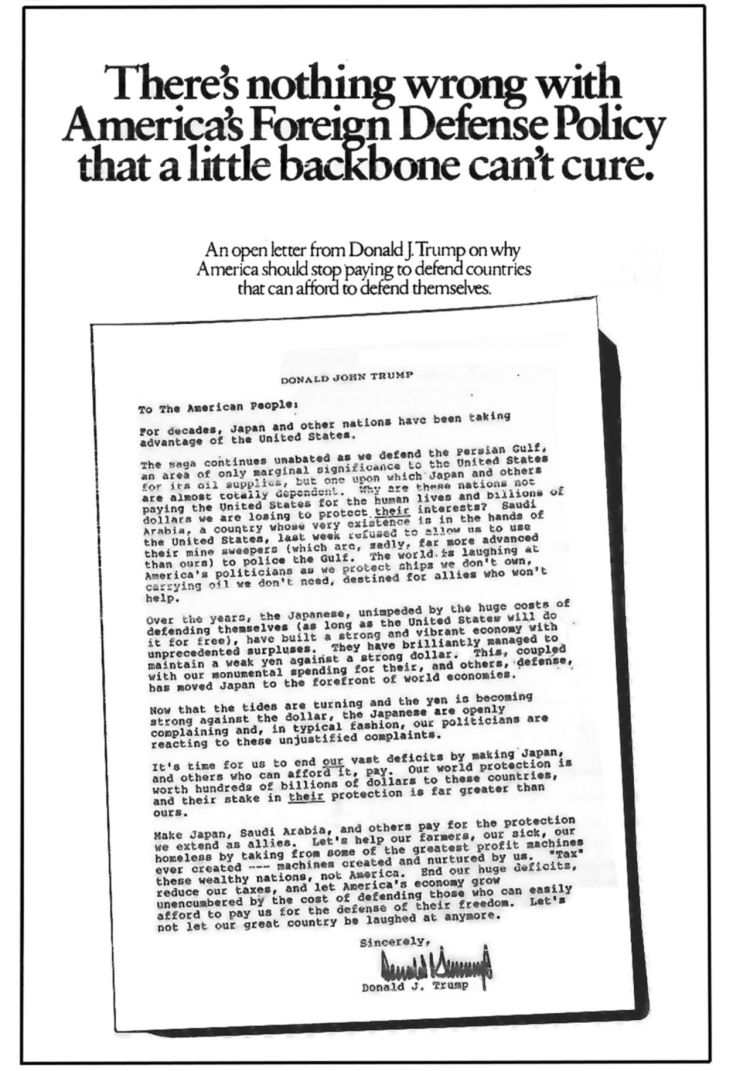 And then, there were these …

Secretary of State Pompeo has been biding his time, waiting and hoping for the opportunity to attack Iran for most of his career.  Donald Trump is an ignorant fool.  What could possibly go wrong?  The reality is that the very last thing this country needs is to start a war with Iran.  Anyone who thinks it would be a good idea … go back to bed and wake up when you’ve become an adult.

14 thoughts on “Must Read Tuesday”