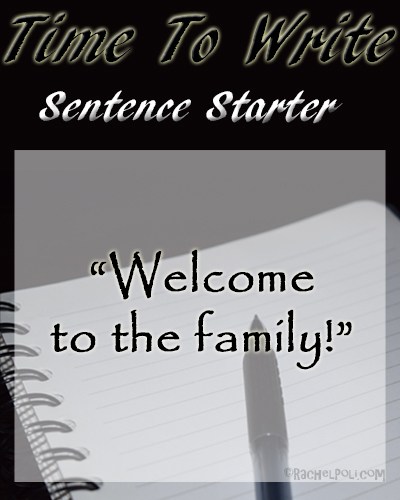 “Welcome to the family,” the woman said upon opening the front door.

Dan was both confused and dazzled. The woman was radiant. He had never seen, in real life, anyway, a woman of such dazzling beauty. Dan took a deep breath and simply said, “I’m from UPS with a package for Arturo Bianchi.”

“Yes,” the woman said. “We’ve been expecting you, Daniel. Please come in.” She stepped aside and waved him through the door.

“How do you know my name?” he asked as he stepped inside the large foyer.

The woman took the package from Dan. “As I said, we’ve been expecting you.” Once he was inside, she closed the front door behind him.

Dan took out the little electronic device, about the size of a smartphone, from his belt holster and held it out to the woman. “You need to sign this,” he said, holding the device out toward her and handing her a stylus.

“That won’t be necessary, Daniel,” she said,  grabbing his hand and leading him into large room at the center of which was sitting a heavyset older man with a shaved head. “This is Arturo, my husband,” the woman said.

Arturo got up from his chair, moved over to Dan until he was standing right in front of him. Arturo stood on his tiptoes, placed both of his hands on Dan’s shoulders, leaned in and kissed him on each cheek, and said, “Welcome to the family, Daniel.”

Dan stood back and said, “There must be some misunderstanding. I’m from UPS and I am here to deliver a package.”

“Ah, Daniel,” Arturo said, “There’s no misunderstanding. You are the package.”

Dan looked at the woman, who was smiling at him in a very sexy way, or so it seemed to him. Then he looked at Arturo. How could this short, fat, bald man who was at least three times her age be the husband of this young, strikingly gorgeous, statuesque woman, he wondered. “What do you mean I’m the package?” Dan asked Arturo.

“Your supervisor, Angelo, has told us about your special skills, Daniel,” Arturo said. “He said that you are a problem solver. That you know how to deal with people. That you can be very, shall we say, persuasive.”

Dan was a big guy, standing around 6’4” and weighing in at 225 pounds. Arturo reached over and squeezed Dan’s bicep and smiled. “You’ll do just fine in our family, my boy,” he said.

The woman who greeted Dan at the door, came over to Dan, stood right in front of him, moved in close enough so that he could smell the subtle scent of her perfume. “My husband is getting older and he needs a bodyguard and an enforcer,” she said. “You’ll be very handsomely compensated and will have generous fringe benefits.”

The woman moved in and pressed her body against Dan and, in a throaty whisper, said, “I’m one of the fringe benefits, Daniel.”

Dan looked over at Arturo, who looked back at Dan and smiled.

Written for Rachel Poli’s Time To Write – Sentence Starter prompt, where the sentence is “Welcome to the Family.” Also for Fandango’s One-Word Challenge (radiant).

14 thoughts on “Time To Write — All in the Family”