When I first started this blog, some of my early posts were fairly long, probably ranging from about 700 to more than 1,000 words. On one of my longer posts, someone wrote a comment that simply said, “TL;NR.” I had no idea what that meant. I thought it was a typo. I finally Googled “TL;NR” and found out that it means “too long; no read.”

Interesting. I was writing blog posts that were too long to read, or at least that was the opinion of one blogger. Was he or she right?

In July 2017, just a month and a half into this blog, I wrote a post titled, “A Man of Many Words.” In that post I wrote, “When it comes to the written word, I’m a man of many — not few — words. Maybe even too many words.” I acknowledged that I have a tendency to over explain things and that “my style of writing, verbose though it may occasionally be, adds color and life to what I write.”

I remember reading somewhere that concise writing helps to grab and hold your reader’s attention, to be more memorable, and to make a lasting impact on your reader. So I decided that I really needed to learn how to be more concise in my writing. Especially since I began responding to prompts that imposed word limits ranging from 50 to 300 words. 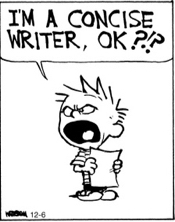 But that was hard for me. Removing what some might consider to be unnecessary words from my writing is difficult. I like to think that everything I write is germane to the subject matter. For me, removing words, phrases, and especially entire sentences, is akin to asking a mother to choose which child she’s willing to edit out of her family.

That said, I am clearly making progress in my efforts to be more concise. And I can prove it, too. Below are the average Words Per Post stats from my previously WordPress Blog (July 2009 to April 2015).

And here are my stats since I started this blog (May 2017 to present).

Damn, I really am concise after all!

Includes the Word of the Day Challenge (learn), and Fandango’s One-Word Challenge (concise)

Last night, at around midnight, right before I turned off my iPhone and went to sleep, I scheduled THIS to be published at 6:30 am my time. It was written in response to Rochelle Wisoff-Fields’ Friday Fictioneers prompt in which she had a picture of a teepee and three chairs in what appears to be a desert setting at around sunset.

When I saw that picture, I remembered that it was raining where we live the night of the Super Blood Wolf Moon eclipse last month, so we couldn’t see it. And then I thought that it would have been cool if we would have driven out to the desert to watch it.

A little while ago I got a comment on that post from my blogging buddy, Kristian, at Tales from the Mind of Kristian. He wrote in his comment, “Was the dessert trifle?”

Oh shit! Did I do what I think I did? I went to my Friday Fictioneers post and sure enough, I had titled it “Dessert Viewing” and in the body of the post wrote, “…drive us out to the dessert in his van.” I have since corrected the title and the body to “desert.”

And to those of you who read my post before I corrected it and thought, “what a moron this guy is,” I apologize. I have learned that it’s not a good idea to post when you’re half asleep and bleary-eyes. But I guess I’ve gotten my just deserts* (or is that “just desserts”?).

And thank you, again, Kristian, for pointing out my faux pas.

*In the expression “just deserts,” deserts is the plural of desert, meaning “that which one deserves.” The phrase generally means that someone deserves the unpleasant things that have happened to them, because they did something bad. Desert, in that sense, is now archaic and rarely used outside this phrase. The spelling “just desserts” is non-standard. It is sometimes used as a pun in, for example, restaurant names.

“Tonight’s the Super Blood Wolf Moon eclipse,” Traci explained, “but it’s cloudy and rainy, so we won’t be able to see it.”

“We can call Nick,” Jason suggested. “He has this big, white teepee that he camps in, and maybe we can persuade him to drive us out to the desert in his van. We can cook dinner over an open fire, set up three folding chairs, get stoned, and witness the eclipse. Then we can all spend the night in his teepee.” 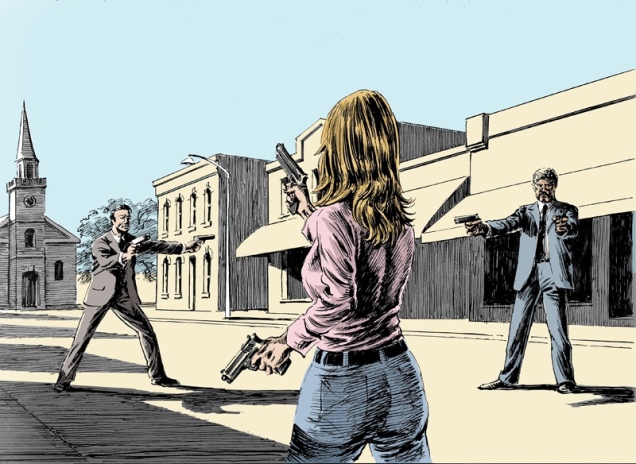 I’ve been tagged by Sadje to tell the story about the image above. Image credit: William Webb.

Cecelia and her boyfriend, Matt, were surprised when they ran out of the local bank they had just robbed in the small, dusty southwestern Texas town. They had expected to find the driver of their getaway car waiting, with engine running, to whisk them away. Instead, they were faced with a U.S. Marshall in a business suit, pistols aimed at both of them, standing in the middle of the street.

Cecelia and Matt, each also armed with two pistols, stood there, pointing both of their guns at the marshall. “Your driver’s been apprehended and your getaway car has been impounded,” the marshall said. “There is a sharpshooter on the roof of the building across the street. So you might as well drop your weapons and come along all peaceable-like.”

“No way, lawman,” Cecelia said. “You ain’t takin’ us alive and we’ll take you down before you can get both of us.”

“Hold on, Babe,” Matt said, looking at Cecelia. “I ain’t ready to cash in my chips yet.” He kept one gun pointed at the marshall, but pointed the other one at Cecelia.

“Are you fucking kidding me, Matt?” Cecelia yelled in disbelief.

“Folks,” the marshall said, “it looks like what we got here is a good old fashioned Texas standoff. So before anyone gets hurt, why don’t you be a good boy and girl and lay your guns down?”

Matt started to put his guns down on the ground when the sound of gunfire filled the air. One witness claimed to have heard Cecelia yell at Matt, “You really are a goddam pussy,” before shooting him. Then, the witness said, she spun around shot the marshall just before the rooftop sharpshooter shot her.

By the time the smoke cleared there were three dead bodies on the street.

I’m now supposed to post an image and tag three bloggers to tell a story about the image below. But I’m going to throw this challenge open to anyone who is inspired by this image, which is the work of Brazilian artist Nele Azevedo.

Welcome to February 1, 2019 and to Fandango’s One-Word Challenge (aka, FOWC). It’s designed to fill the void after WordPress bailed on its daily one-word prompt.