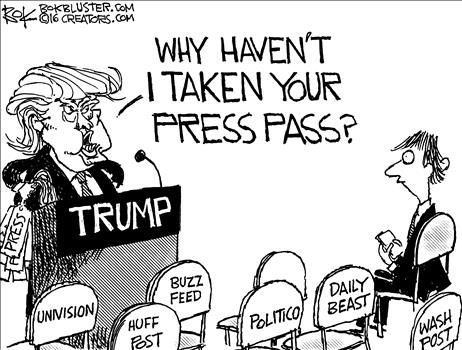 He calls the stories in newspapers, magazines, and on TV about him “fake news. He refers to the free press as “the enemy of the people.”

But in a way, I understand Donald Trump’s enmity toward the press. After all, they call out his lies, they fact check his “alternative facts,” and they demonstrate just how unhinged, unfit, and unqualified he is to hold the office of President of the United States.

By printing what he says and does, by video taping his own words, by counting his lies, and by documenting his misstatements and fabrications, the press is demonstrating the depth of his narcissism, his lack of knowledge, his inability to be empathetic, and his moronic delusions.

By quoting him, the press is showing that he has an inability to construct cohesive sentences, which is not surprising, given the clearly chaotic way his mind works.

Unfortunately and inexplicably, about 40% of American voters hang on his every word and believe every lie that escapes his lips. Apparently, if they even watch news, it’s only Fox News. And if they even read newspapers, it’s only conservative newspapers.

So the master of the con continues to carry on and we just have to hope that the press will continue to do the job that the Republicans in Congress seem to be unable and unwilling to do: keep the president in check for the good of the country.

Written for the benefit of America and for my one-word challenge (enmity).

6 thoughts on “Enmity Toward the Press”