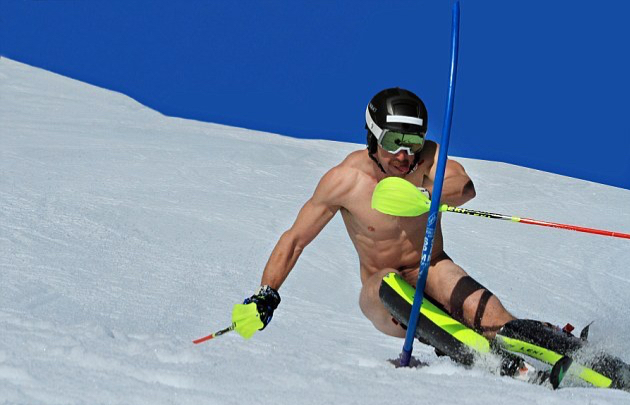 That is not me in the picture. Just to set the record straight, I have never in my life skied naked. Yet there is a rumor floating around the blogosphere that I have, indeed done so.

It all started when Rory (A Guy Called Bloke) posted about being nominated for the Sunshine Blogger Award. In that post, he included me in the group of bloggers he nominated to pay it forward and he posed a bunch of questions, the nature of which Rory is wont to ask (i.e., weird ones).

Think about what I wrote. I wrote, “Without being naked?” Maybe I misunderstood Rory’s question, but my response was clearly talking about not being naked. Am I right or what?

But apparently a number of bloggers glommed on to the notion that I skied naked. I figured this misconception would eventually fizzle out.

But no. Today, Mel, over at Crushed Caramel, “gifted” me with this pair of thermal underwear.

She wrote, “My first priority is a gift to Fernando* Fandango, the creator of This, That, and The Other. I would like to give the gift of thermal underwear for skiers. Specialist skiers underwear that is also aerodynamic. It won’t slow you down on the ski slopes but it will help to prevent frost bite. Frostbite can turn very nasty, so please do wear something on the slopes.”

But I already do wear thermal underwear when I go skiing because I don’t sky naked!

So, once and for all, I’ve never skied naked. I’ve been naked at a nude beach, I’ve been skinny dipping at a flooded rock quarry, and I’ve frolicked in the altogether with friends in a hot tub. But skiing naked. Uh uh!