Linda G. Hill is the host of the very popular Stream of Consciousness Saturday prompt. Every year she holds a contest for bloggers to submit a new badge design for her weekly prompt. See the details and rules here.

I have decided to give it a shot this year, since I love this intriguing challenge and participate just about every week. And so, here’s my kind of unusual (in that there is no stream involved at all) entry.

I took this picture in Golden Gate Park earlier this year and the wispy clouds reminded me of what an airborne stream of consciousness might look like.

I don’t expect my badge to be selected, but you never know, right. As they say, you miss 100% of your shots not taken. Besides, my blogging buddy Jim Adams, at A Unique Title for Me,  entered the contest and I’d never forgive myself if he ran unopposed and won! 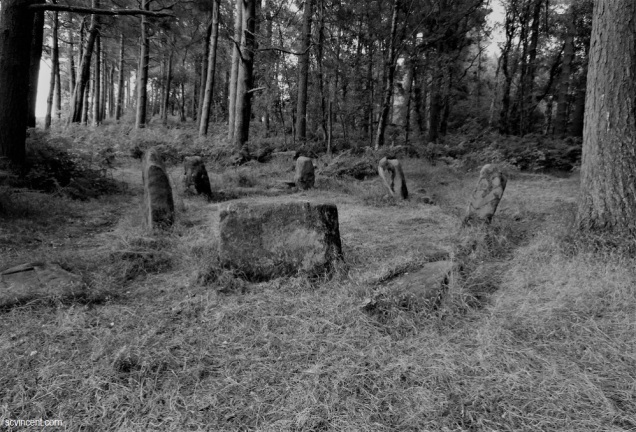 Malcolm slowly walked into the clearing and sat down on the largest of the rock formations, which was encircled by smaller rock outcroppings. It had been several hundred years since he last visited this holy site and he wasn’t sure what kind of reception he would receive in these modern times.

A deep fog descended upon the clearing, so deep that Malcolm could barely see the hand that he held up in front of his face, which vexed him, as he didn’t have time to waste. But as the fog began to dissolve, Malcolm could see visages of the five summoned spirits hovering over each of the outcroppings.

“Why have you assembled us here, Lord?” one of the spirits asked.

“It has been a while since you reached out to us,” another said.

“These are dark days,” Malcolm said. “We must take advantage of these troublesome times in order to carry out our ancient charge.”

“What is your command?” the third spirit queried.

“Yes, Master, what would you have us do?” the fourth asked.

“The human forms are bound and determined to destroy this planet and one another,” Malcolm said. “Having assumed their appearance and having lived amongst them, I have learned the best way of setting things back on the right path.” He beckoned the spirits to hover next to him while he quietly shared his plan.

“Yes, it does,” Malcolm admitted. “But it’s worth the risk to avoid total annihilation and devastation if we do nothing.”

“Lord,” the five spirits said in unison, “your wish is our command,” before they floated away and disappeared into the night.

Malcolm smiled, stood up, and left the clearing.

Written for these prompts:

Donald Trump has been accusing the mainstream media of spewing fake news and has called the free press an enemy of the American people. In response, an estimated 300 newspapers have signed on to a call from the Boston Globe for a coordinated editorial campaign in today’s editions as a way to protest against President Trump’s “dirty war on the free press.”

Naturally, I assumed that, when I opened my paper this morning and turned to the editorial page, I would see a well-crafted, engaging defense of the free press. After all, I live in San Francisco, the heart of the resistance.

But no such editorial was there. WTF? So I went to the newspaper’s website to see if maybe they published the protest editorial there. Nada.

But I did find an article attempting to justify why the editorial board of the Chronicle did not join the protest.

“It’s not that we take issue with the argument that Trump’s assault on the truth generally, and his efforts to diminish the free press specifically, pose a serious threat to American democracy,” the article said. “We wholeheartedly agree with Marjorie Pritchard, the Globe’s deputy editorial page editor, that such unprecedented attacks on press freedom by the president of the United States ‘are alarming.’”

The concern, according to the Chronicle article, is that “it plays into Trump’s narrative that the media are aligned against him” and that Trump will use that as an excuse to spew out tweets accusing the fake news media of collusion and anti-Trump bias. “He surely will attempt to cite this day of editorials to discredit critical and factual news stories in the future, even though no one involved in those pieces had anything to do with this campaign,” the article suggested.

“Our editorial page will continue to speak out against this president’s war on the free press. Our silence on Thursday is testament to our commitment to do it in our own way, on our own timetable.”

Personally, I disagree with the position the newspaper’s editors took to not participate in this organized protest. Sure, Trump will probably lash out at those newspapers for speaking out against him. That’s what he does. But should that threat render us silent? Should anger or retaliation on the part of our unhinged, incompetent, vindictive president cause us to stop protesting what he’s doing to our nation?

I don’t think so. What do you think?

“Time is on your side…or is it?” the Philosophy 101 professor said. “Open your blue books. You have one hour to express your thoughts, starting now.”

There was a low murmur through the classroom as the students reacted to the unexpected pop-test. Mark thought about how time was definitely not on your side when asked to write a paper about time in just an hour. But he didn’t think that would go over too well with the professor.

Then his mind wandered to his parents. After they had been married for nearly 20 years, their marriage had fallen apart. His mother told him that with the passage of time they had grown apart. His father said that when you live with someone day in and day out for years on end, you sometimes focus too much on their faults and weaknesses, rather than on how much they have to offer and what they bring to the table. He used the expression “familiarity brings contempt.”

And so, about six years ago, when Mark was fifteen, his parents got divorced. It was tough on him, as he stayed in their home with his mother, but spent every other weekend, plus two weeks each summer and most holidays at his father’s place.

When it came time to go to college three years later, Mark decided to go out-of-state just so he didn’t have to be around his parents and deal with their being divorced. There was still a lot of bitterness between them. Fortunately, he had qualified for a full-ride scholarship to a very good college halfway across the county and he came back home as infrequently as possible.

After completing his junior year at college, Mark return home for the summer to his mother’s house and was surprised to find that his father had moved back in and they had decided to remarry. His mother told him that they both realized that they were better together than they were apart. His father explained that being separated from his wife for so long made him realize just how much she meant to him. He used the expression “absence makes the heart grow fonder.”

Mark thought about the topic for the paper, time being on your side or not, and then thought about his father’s comments about familiarity breeding contempt and absence making the heart grow fonder. He decided to write about the dichotomy of time in his parents’ case, where its passage was not on their side and then it was. He thought that would be a great way to demonstrate that the impact of time can be circumstantial. This is A-plus material, he thought to himself as he put pen to paper in his blue book.

But before Mark could finish writing the first sentence, he heard the professor say, “Time’s up. Put your pens and pencils down, sign and close your blue books, and drop them off on my desk as you leave the classroom.”

Written for Mindlovemisery’s Menagerie Tale Weaver prompt, where we are asked to consider the notion of “time’s up.”

Welcome to August 16, 2018 and to Fandango’s One-Word Challenge (aka, FOWC). It’s designed to fill the void after WordPress bailed on its daily one-word prompt.