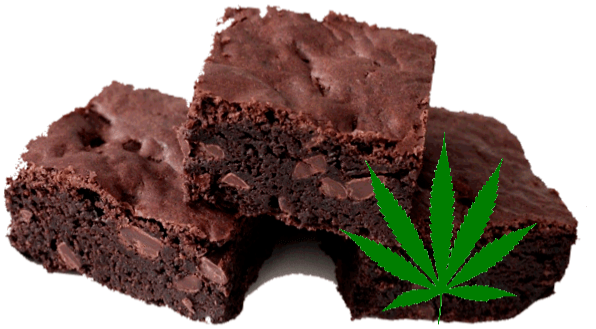 “You embarrassed me this evening,” my wife said. “It was her first day of high school. There was no need for you to have caused such a commotion. My God, what were you thinking?”

“Well, I thought it was a novel idea,” I said in my defense.

“Seriously? You thought serving Alice B. Toklas brownies to a bunch of high school freshman was a good idea?” she yelled. “I should smack you upside your head with that spatula you’re holding in your hand.”

“I thought it would mellow them out, relax them, given the pressure from their first day of high school,” I explained. “I honestly didn’t think it would debilitate them.”

“They’re fifteen year old children, you idiot,” she said. “If their parents find out, and I’m sure they will, you’re going to be swimming in an ocean of shit.”

“Oh stop being such a drama queen,” I said. “Everthing will be fine.” That’s when the doorbell rang. “Ah, saved by the bell,” I said.

I went to the door and opened it up. There were two uniformed police officers standing there. “Mister Marx,” one of them said. “We’ll need you to come with us to the police station.”

“Honey, call our lawyer,” I called out to my wife.

Written for a whole lot of today’s prompts:

“Okay. But what is it?” Miranda asked again.

“I call it ‘Waste Not, Want Not,’” he responded. “It’s ecologically and environmentally friendly. I’m sending a message about recycling and reusing things and turning it all into art.”

“It looks like you’ve stacked seven shipping pallets on top of one another and filled them with broken Spanish roofing tiles, some cracked clay flower pots, sticks, and some pieces of copper tubing,” Miranda said, “with a few bunches of grass on top.”

Welcome to August 3, 2018 and to Fandango’s One-Word Challenge (aka, FOWC). It’s designed to fill the void after WordPress bailed on its daily one-word prompt.