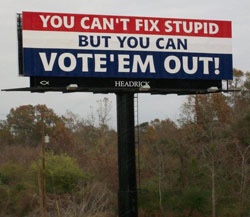 “You can’t fix stupid but you can vote ‘em out!”

I don’t know who should receive credit for this quote, and I’m pretty sure it’s been around since way before Donald Trump became POTUS. But whatever its origins, it’s a call to arms to all Americans.

By “arms” I mean the ballot box. You must get out and vote in the primaries and in the midterm elections in November. That’s the only way to put a check on the corrupt, immoral moron who lives in the White House and to remove the spineless Republican senators and representatives in Congress who are not doing what they should to save our American democracy.

Because if the Republicans somehow manage to maintain control of either the House or the Senate, the Conman-in-Chief will continue to chip away, virtually unchecked, at what remains of our democracy.

2 thoughts on “One-Liner Wednesday — A Call To Arms”