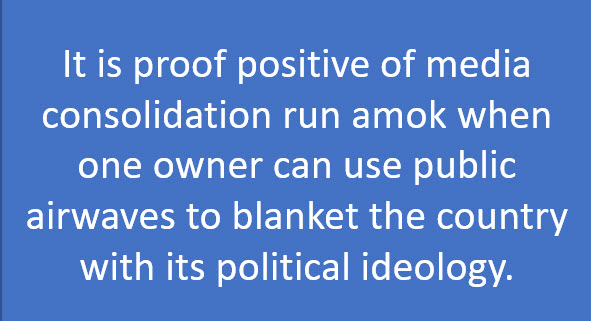 I read something disturbing in the newspaper this morning. And yes, I still subscribe to home delivery of my local paper.

I read that Meredith Corp., an Iowa-based company, which owns TV stations that reach 12 million U.S. households, announced that it is buying Time Inc. for about $1.8 billion. Meredith is known for its women- and lifestyle-focused magazines and websites, including Better Homes & Gardens, Family Circle, and Allrecipes.

So what? Well, what disturbs me is that Meredith got $650 million in financial backing from the private equity arm of Koch Industries, the energy conglomerate of the billionaire Koch brothers who are known for their advocacy for conservative causes.

So the acquisition of Time Magazine, which has not been kind to Donald Trump recently, was funded, to a large extent, by two ultra-conservative billionaires who are mega-donors to Republican candidates and causes. And you know, of course, that the Wall Street Journal, as well as the New York Post, are owned by Rupert Murdock, principal owner of Fox News.

This past May, Sinclair Broadcast Group Inc., another very conservative media company, bought Tribune Media Co. for about $3.9 billion, a deal made possible after the U.S. Federal Communications Commission, led by Trump’s recently appointed FCC Chairman, Ajit Pai, voted to ease a limit on TV-station ownership in the U.S.

The marriage of Sinclair and Tribune, two of the largest local TV station owners in the U.S., creates a broadcasting behemoth with a hard-right tilt. Sinclair’s management requires its stations to broadcast conservative commentaries on a recurring basis. Once the acquisition is approved, Sinclair will control a whopping 233 TV stations that reach 72% of U.S. households.

As these conservative broadcasting companies and media outlets knit together a nationwide network to spread the conservative ideology, the Republican majority in the FCC wants to rollback landmark media ownership regulations that prohibit owning a television station and newspaper in the same market and making it easier to acquire additional TV or radio stations.

Under this ruling, broadcasters will be allowed to combine with a newspaper in the same market, and could be allowed to own two of the top four stations in a city.

So under the Trump administration, the conservative agenda is getting a huge boost and is being permitted to knit together vast, influential, right-leaning media networks intended to blanket the country with their conservative political ideology and to shape the hearts and minds of Americans.

Now don’t get me started on Net Neutrality